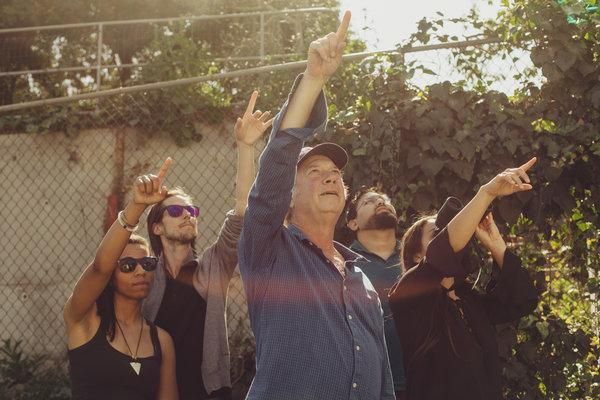 • UFO social groups are becoming popular. One such group was begun in Los Angeles by Robert Bingham, 62, who has held his annual UFO “Summon Events” in an LA park since 2010.  (seen above)  It began when Bingham was 39 and saw a 20-foot tall worm-shaped ship zipping through the clouds. He’s seen and taken photos of a ‘saucer’ and some flying objects shaped like beans. His photos began to attract dozens of believers from all over the world who come to share their own stories of UFOs and extraterrestrial communications. Bingham attempts to summon UFOs at these gatherings.

• “It’s a great community because you can talk about anything and you’re not worried about being called crazy,” said Hans Boysen, 53, who has participated in the last seven summoning sessions with Bingham since 2011. Boysen has gone on to co-found another group called the L.A. U.F.O. Channel who meet monthly.

• Rafael Cebrian, 29, a two-time attendee, brought a curious friend who was visiting from Spain. He said it was about being open and being in the right state of mind.

• Angel Llewellyn, 49, drove to Bingham’s event from San Jose, California, for a second year as a form of pilgrimage. “It’s like he charges you,” she said (as in ‘inspires’ you, not as in charging you admission). “He teaches you how to call [UFOs] and what to think and they just, boom, boom, boom. It’s like fishing. You never know what you’re going to get.”

• Other groups like the U.F.O. and Paranormal Research Society focus on discussions, often with speakers who talk about their research and experiences. A nonprofit group called the Mutual U.F.O. Network, or Mufon, founded in 1969, has over 4,000 members worldwide and convenes a yearly symposium. This year, a former Pentagon intelligence officer, Luis Elizondo, will give the Mufon keynote address. Many in the community believe that organizations such as the ‘To The Stars Academy for Arts and Science’, headed by Elizondo and former Blink-182 guitarist Tom DeLonge, are just the beginning to discovering the truth about ETs and UFOs.

• Yasmin Joyner, 35, an artist, recently formed another UFO discussion group, Indigo Army, that she hopes will attract a younger and more diverse crowd. Its members organize sightings at one another’s houses and nearby parks. Joyner says she understands that there are consequences to being outspoken about beliefs that many people may deem weird or crazy. “I think my family was a bit worried that I had snapped or something, but once they saw my footage and what I was seeing, they understood,” she said.

• Mallory Jackson, 26, who attends ‘hangouts’ led by Mr. Bingham and the Indigo Army, says she finds it difficult to maintain relationships outside the U.F.O. community with people who might not be as understanding of her interests. “[Y]ou’ll see all ages, all ethnicities, all genders,” says Ms. Jackson. “It’s beautiful, and we’re all just trying to figure it out as we go.” She became friends with several members “right away” before meeting another longtime attendee of Mr. Bingham’s events, Jim Martin, 38, who is now her boyfriend.

• How exactly does the group try to summon UFOs? Most agree that it’s similar to meditating, accompanied by a physical sensation. Joyner says the important thing is to focus. At the event in April, some participants closed their eyes and stood silently. Some stared intently into the sky. When someone spots something, they train a telescope on the object which is connected to a camera and a screen that shows and records what is being seen. They post the best videos on their YouTube channel.

Robert Bingham has “seen things.” When he was 39, he looked skyward and noticed a worm-shaped ship about 20 feet tall zipping through the clouds.

Unusual things kept popping up around him — or above him, rather. He saw a saucer and some flying objects shaped like beans next. He snapped a picture.

For over ten years, he kept his sightings to himself. That changed in 2010, when his neighbor came over to do some plumbing work. Mr. Bingham showed him his photos. The neighbor asked if he could invite his brother, who was very interested in unidentified flying objects, or U.F.O.s.

In awe of what they saw, they asked if they could invite more people to speak with Mr. Bingham — 40 more, actually. More than eight years ago, that was the first meeting of what is now known as “Summon Events with Robert Bingham,” at a park in Los Angeles across the street from where Mr. Bingham worked as a security guard.

Mr. Bingham, 62, an unassuming man who describes himself as shy, has become the nexus of a community of U.F.O. hunters in Los Angeles, fervent believers who come together to share their stories and persuade skeptics that extraterrestrial communications aren’t just a conceit for television shows.

Since then, he has attracted U.F.O. enthusiasts from all over the world, drawn together by the same questions: What are these things in the sky, exactly, and how can we learn more about them?

While there is just not enough documentation or scientific evidence to begin to explain or even confirm these sightings, that doesn’t stop the dozens of people that once a year descend on the same park to watch and assist Mr. Bingham as he tries to summon the “objects,” as they call them, and also to hang out with other enthusiasts who have turned into friends.

“It’s a great community because you can talk about anything and you’re not worried about being called crazy,” said Hans Boysen, 53, who has participated in the last seven summoning sessions with Bingham since 2011.

Other groups, like the U.F.O. and Paranormal Research Society, don’t organize sighting sessions, but rather focus on discussions, often with speakers who talk about their research and experiences. A nonprofit group called the Mutual U.F.O. Network, or Mufon, founded in 1969, has over 4,000 members worldwide and convenes a yearly symposium. This year, a former Pentagon intelligence officer, Luis Elizondo, will give the keynote address.

Last year, The New York Times conducted interviews and obtained records pertaining to the $22 million spent on the Advanced Aerospace Threat Identification Program. The program — parts of which remain classified — investigated reports of unidentified flying objects, according to Defense Department officials. According to the article, officials insisted that the effort had ended after five years, in 2012. The article also stated that Sara Seager, an astrophysicist at M.I.T., cautioned that not knowing the origin of an object does not mean that it is from another planet or galaxy. “When people claim to observe truly unusual phenomena, sometimes it’s worth investigating seriously,” she said. But, she added, “what people sometimes don’t get about science is that we often have phenomena that remain unexplained.”

As much as scientists deal with probabilities, they rely on data and the reality is, no matter how many videos people upload on YouTube, they’re simply not enough to draw any definitive conclusions from.

But that doesn’t stop this community from searching. Many in the community that forms around Mr. Bingham believe that the multimillion-dollar alien research efforts of the former Blink-182 guitarist and singer Tom DeLonge are just the beginning to finding out some answers. Mr. DeLonge made headlines after To the Stars Academy of Arts & Science, a research group he founded — Mr. Elizondo is its director of global security and special programs — released declassified footage from the Department of Defense and continues his efforts.

Angel Llewellyn, 49, drove to the event from San Jose, Calif., for a second year as a form of pilgrimage. She said she started seeing things right after attending to Mr. Bingham’s event for the first time.

“It’s like he charges you,” she said. “He teaches you how to call them and what to think and they just, boom, boom, boom. It’s like fishing. You never know what you’re going to get.”