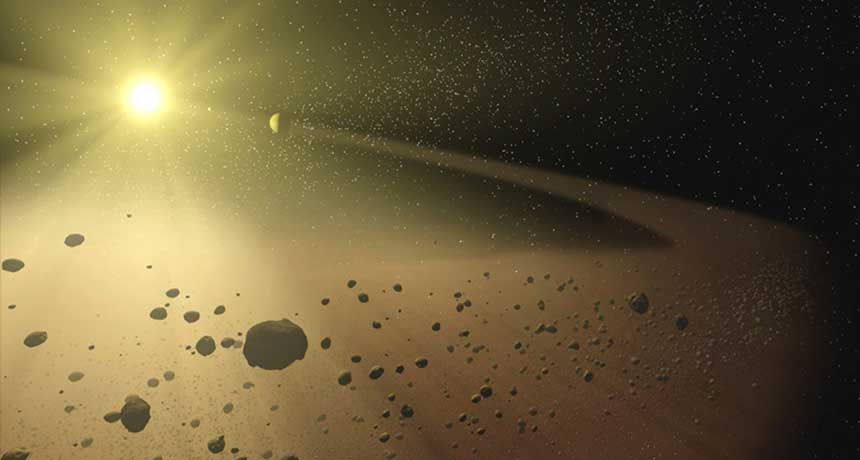 KIC 8462852, also known as Tabby’s Star, has dimmed again. Researchers say that it dipped in brightness more dramatically than ever.

• In 2011, the Kepler Space Telescope observed a star that dimmed as much as 22 percent. The star is KIC 8462852, also known as Tabby’s Star named for Tabetha Boyajian, the Louisiana State University astrophysicist who discovered the star. Since then it has been observed to sporadically dim in brightness, then return to normal.

• On March 16, 2018, Boyajian and colleagues recorded the “…deepest dip we have observed since the Kepler Mission in 2013! WOW!!” By March 22nd, the star’s brightness increased rapidly and was nearly back to normal when it started to dim again on March 26th, even moreso than the previous week and setting a new record.

• A planet passing between a star and Earth will typically cause the dimming of the host star by 1 percent or less and at regular intervals. What makes the Tabby’s Star different from many others is that it dims at unpredictable intervals and at varying degrees.

• A popular theory of the cause of Tabby’s Star’s erratic dimming is the orbit of an alien megastructure around the star, such as an array of solar panels created by an intelligent extraterrestrial civilization. Other theories involve the star devouring a nearby planet, or interference by a comet, or interstellar dust.

Louisiana State University astrophysicist Tabetha Boyajian, who discovered the star, and colleagues, revealed that the star has dimmed by at least 5 percent and possibly 10 percent.

The scientists said that Tabby’s star, also called “alien megastructure star” due to its bizarre behaviors suspected to be associated with an intelligent alien civilization, started to dim on March 16 and then returned to normal.

Boyajian and colleagues said that the dip in brightness was the largest observed dip in the star since 2013.

“On Friday (2018 March 16) we noted the last data taken were significantly down compared to normal,” the researchers wrote in their Tabby Star observation blog. “This is the deepest dip we have observed since the Kepler Mission in 2013! WOW!!”

By March 22, the star’s brightness increased rapidly and was nearly back to normal but it started to dim again on March 26.

“Today we have some very big news – data taken at TFN last night show the flux is down 5 percent,” Boyajian and colleagues reported on March 26. “Looks like we beat the record set just last week on the deepest dip observed since Kepler!”

In 2011, the Kepler Space Telescope observed that the star dimmed as much as 22 percent. Other dimming events also occurred throughout 2017.

Scientists Wrong In Ruling Out ‘Alien Megastructure’ Around Dimming Star

• “Tabby’s Star”, or KIC 8462852, is over 1000 light years from Earth and displays four separate dips in the star’s brightness. It made news in 2017 that its dimming might be due to an alien megastructure or some type of artificial construct of alien design such as a ‘Dyson Sphere’ partially covering the star.

• Now, in an article posted to Phys.org, one of the lead co-authors of the study, the star’s namesake Tabetha Boyajian, notes that the dimming and brightening of Tabby’s Star is due to a massive cloud of dust and is “not opaque, as would be expected from a planet or alien megastructure.” She and her co-authors say that an artificial alien structure can be ruled out because if it were a solid megastructure, the wavelength depth of the dimming would more consistent.

• But couldn’t an alien structure surrounding the system’s star not necessarily be of a solid material, but rather made of a type of material that would allow some filtering of the light? Or what if it is only partially completed and therefore not consistent in its dimming? It is, therefore, wrong to strictly rule out the possibility that the star’s dimming might be due to an alien construct around the star. On the other hand, it could be simply due causes that are natural in the cosmos, as the astrophysicists now say.

One of the continuing story subtexts in all the recent deep space and exoplanet discovery articles, not to mention those covering the accumulating data from planets and moons within our own Solar System, is that the existence of alien life cannot be ruled out. As an exception to this, in further study of Tabby’s Star, the mysterious dimming star KIC 8462852, it was revealed that the cause of the dimming effect was most likely due to a natural phenomenon, and it could be ruled out that the strange effect was caused by an alien megastructure or some artificial construct of alien design.

But is that correct?

To be precise, according to an article posted to Phys.org, one of the lead co-authors of the study, star namesake Louisiana State University’s Tabetha Boyajian, noted that the dimming and brightening of KIC 8462852 was due to a massive cloud of dust and was “not opaque, as would be expected from a planet or alien megastructure.” The conclusion was derived from perusing months of observation data of the so-called “dimming star” — which is over a thousand light years from Earth — that captured four separate dips in the object’s brightness. By studying the various wavelengths, it was determined that the effect, if it were a more solid or opaque obstruction, would present itself in the dimming data as a similarity in wavelength depth.

Penn State’s Jason Wright, also a co-author of the study, supports Boyajian’s conclusion. He writes in his blog, AstroWright, that the new study suggests “we now have no reason to think alien megastructures have anything to do with the dips of Tabby’s Star.”

Although they may be correct, Boyajian and Wright’s conclusion could well be flawed in the thinking that an extraterrestrial civilization so advanced to be able to build an alien megastructure that could surround (or even partially surround) something as large as a star would be constrained to using materials that might not allow some filtering. That is, not getting similar wavelengths or some wavelength uniformity from the dimming star data might not actually rule out an alien megastructure if such a massive construct was built using materials that allowed at least some of the star’s light to pass through.

And then there is the possibility that the dimming is caused by a structure that is itself only partially complete.