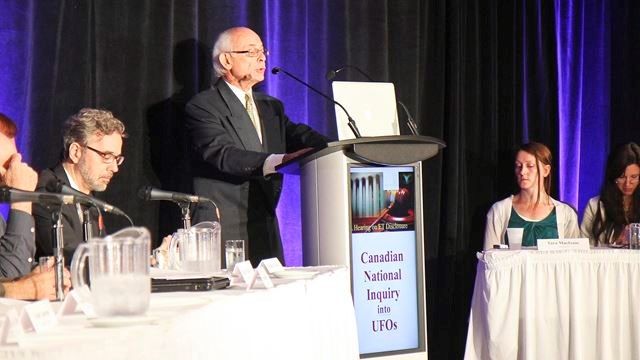 • Victor Viggiani, a retired school principal from Toronto, Canada, addressed a distinguished panel at the Alien Cosmic Expo in 2016 with classified documents of the North American Command Aerospace Defense (NORAD) concerning the observations of U.S. and Canadian fighter pilots engaging UFOs. (see 1:56 minute video below) He released the documents in spite of being threatened with being indicted for espionage and threat to national security.

• Among the eleven NORAD documents, there were 75 reported cases of pilot “intercepts”, where military craft came very close to alien craft. According to one document, in 2001, two CF-18 aircraft climbed to 35,000 feet and saw three flying saucers. Another document reveals how on November 14, 2008 a metal element, likely part of a UFO, was discovered.

• Notwithstanding, a Canadian Intelligence Committee report advised that Canada should go on a “parallel system” with the United States Air Force, to play down UFOs at all costs.

• [Editor’s Note]   Some of this information was taken from the video.

Victor Viggiani from Toronto has published some classified documents of the North American command aerospace defense (NORAD), which was relevant a few decades ago.

Male 30 years ago was engaged in the study of UFOs. He could not disclose any information, as all its activities are classified. Only now, after retirement, Victor was able to uncover some peculiarities of their work.

There were published 11 files, which referred to the observations of fighter pilots in flying saucers. There were 75 cases where the U.S. military is very close to the alien ships.

Victor notes that every year in the sky there are more UFOs. So far, the humanoids do not be aggressive, however it can occur at any time. People do not provoke alien creatures, sure man.

According to one document, in 2001, two aircraft CF-18 took to the air. Then at a height of 35 thousand feet military saw three flying saucers. The second source States that on 14 November 2008 was discovered a metal element, which is most likely part of the UFO.

The authorities of the developed countries in recent times not so aggressive hide information about the humanoids. Some experts even hold conferences and invite “hunters” UFO. Apparently, everyone is sick to remain silent.