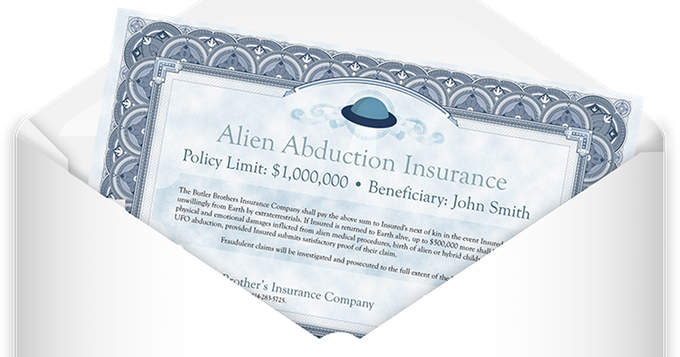 Victim of Alien Abduction? There’s an Insurance Policy for That

• Mike St. Lawrence of Altamonte Springs, Florida has sold nearly 7000 ‘alien abduction insurance’ policies since 1987. A digital-only policy costs $19.95, while a paper copy costs $24.95, in return for $10 million in coverage which is paid in installments. A claimant will receive $1 a year for 10 million years. The cast of “The X-Files” and the producers of the movie “Contact” took out abduction coverage.

• St. Lawrence (71) has accepted and began paying on two claims. Early in the 1990s, one policy holder filed a claim, saying that he had been abducted. This man produced a UFO implant and, according to St. Lawrence, an MIT professor determined that it was “not made of any earthly substance.” To authenticate a claim, St. Lawrence normally requires the signature of an authorized extraterrestrial. But Lawrence waived that requirement for this individual. Another abductee policy holder produced a dark Polaroid photo of the inside of an alien spaceship with his claim. After some consideration, St. Lawrence approved the claim. Both of them are now due $10 million.

• In the event the aliens insist on conjugal visits or consider the abductee a meal, that person could receive $20 million under the policy’s double indemnity coverage.

• St. Lawrence said that while there are some exceptions, most people understand the insurance policy is a joke. “It says on our website, ‘You can’t get it if you don’t get it,’ ” says St. Lawrence. “I’ve had professors use my policy in their college class on critical thinking.”

• Donald Blackwell, a Hudson, Florida resident who claims to have been abducted multiple times, bought two policies for friends after reading an article in the St. Petersberg Times. “I enjoyed seeing how facetious it was,” Blackwell said. “I got a kick out of it, and I’m still laughing about it. Of course, I am the beneficiary.”

People prepare for the worst. They buy car insurance, health insurance, eye and dental insurance, maybe even flood insurance. But what about alien abduction insurance?

Mike St. Lawrence, an Altamonte Springs resident who once had ambitions of becoming a comedy writer, started selling UFO abduction policies in 1987 after reading “Communion” by Whitley Strieber.

“It was a best-selling book that kind of brought the UFO abduction phenomena to the public’s consciousness,” St. Lawrence, 71, said.

He changed the name to “alien abduction insurance” upon realizing the term alien trumped UFO in public discourse. Otherwise, the policy has remained largely the same since its inception.

One man, early in the 1990s, reached out to St. Lawrence and claimed that he had been abducted. This man produced a UFO implant and, according to St. Lawrence, an MIT professor determined that it was “not made of any earthly substance.”

To authenticate a claim, St. Lawrence requires the signature of an authorized extraterrestrial but waived the requirement for that individual.