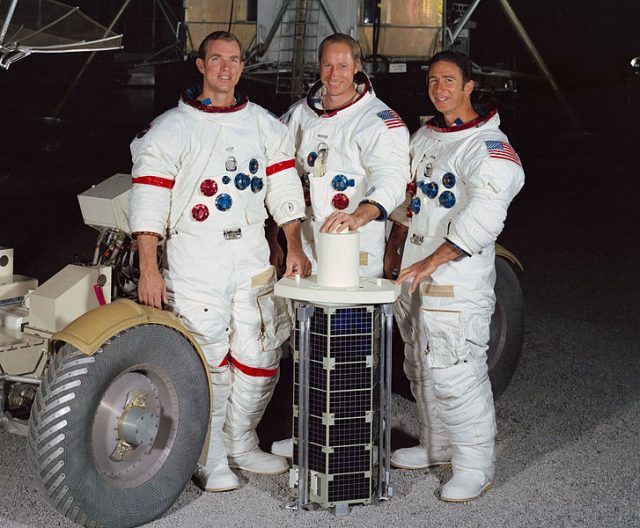 After three orbits of Earth, the command module traveled to the Moon under the direction of Command Module Pilot Alfred M. Worden, who then orbited the Moon 75 times while Commander David Scott and Lunar Module Pilot James Irwin spent three days on the lunar surface. This was Worden’s first (and only) space mission and, when his orbit took him to 2,235 miles from the surface, he set a record (at the time) for being the farthest away from any other human beings.

Worden called it “three wonderful days in a spacecraft all by myself” and apparently used that time to do a lot of thinking about those even-farther-away humans on Earth and how they got there. He finally opened up about his thoughts in a recent interview on Good Morning Britain when he said this:

“I’ve been asked that question hundreds of times … are there, do you believe in aliens? That I say yeah, have you ever seen one, I say yeah, I have. Well how have you seen him? Well I said I look in the mirror every morning. That’s what we are … we are the aliens but we just think there’s somebody else but we’re the ones who came from somewhere else because, because somebody else had to survive and they got in a little spacecraft then he came here and they landed and they started civilization here. That’s what I believe.”

“Somebody else had to survive” so they got into a spacecraft and moved here, where they were alone like Worden circling the Moon, except they got to land and procreate and populate the planet with their race that Worden and the rest of us call ‘humans’. That sounds like something right out of graphic novels and would be discounted as such if it weren’t coming from one of the handful of humans who have actually done the same thing … left their home planet.

In fact, Worden says that humans in the future will have to – if you believe his first premise – leave their home planet AGAIN and move to another orb that can sustain us. Nothing in our solar system (sorry Elon) fits the bill, so Worden says:

“We got to develop the capability to go someplace where there is another earth and we know that they’re out there, there’s no question of that, they are out there, but there are a little ways out, maybe 3.2 light-years is the nearest one, which means we got to build a machine it goes a little faster than the speed of light and that’s gonna be the big key.”