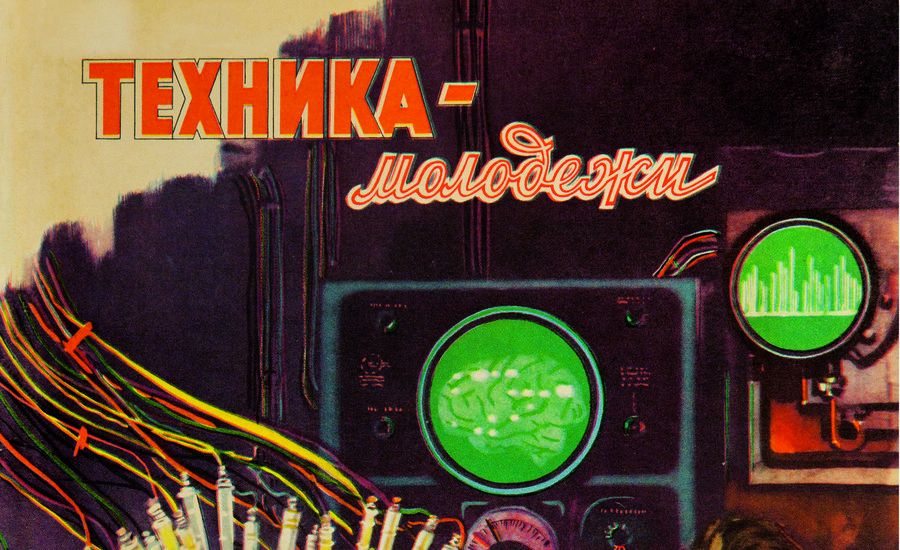 How Soviet Science Magazines Once Fantasized About Life in Outer Space

• Alexandra Sankova, director and founder of the Moscow Design Museum, has mined the proliferation of “Space Age” artwork from the Soviet Union during the Cold War in her new book: Soviet Space Graphics: Cosmic Visions from the USSR, containing more than 250 otherworldly images. Sankova discovered that the popularity of the artwork in Soviet science magazines through the decades mirrored not only the national pride in Soviet space achievements, but was used as a powerful propaganda tool promoting the idea that the Soviet cultural revolution need not be limited to Earth.

• Soviet citizens lived vicariously through science magazines which depicted surreal and fantastical images of a future space-faring lifestyle. Scientists, astronauts, and aircraft engineers were treated like living legends. Science magazines were so popular that at their peak there were 200 different publications.

• But Soviet space illustrations were not drawn to entertain as much as to educate and promote the Communist mission. Posters, magazines, books, brochures, etc., were a most effective means of propaganda. They were fast and cheap to manufacture, and they presented material in a striking and vivid way, making information visual and generally understood.

• In the early days, Russian philosophers and inventors were at the forefront of promoting a fantastic technological future that included travel between planets and universes, and the existence of highly developed extraterrestrial civilizations throughout the entire universe. Soviet writers and illustrators followed suit. With the upsurge of science-related publications, books, novels, and short stories, and the production of science fiction films in the 1920s and then in the 1950s and 1960s, Soviet artists often had a technical education and a sincere enthusiasm for new discoveries in various fields of science.

• With the successful launch of the Soviet Union’s Sputnik 1 satellite in the 1950s, the romanticization of space in science magazines was replace with real images of the universe and the newest versions of Soviet rockets, satellites and spacecraft. Illustrations tended to look like real photographs. These fantasy illustrations typically depicted Soviet cosmonauts in a lunar habitat or laboratory with a window view of the moonscape, rather than being in open space. The citizen was always depicted as part of a larger endeavor.

• In the 1960s, the “cosmic style” became the leading motif in Soviet design and architecture. Houses and public buildings began to resemble interplanetary ships, satellites, and flying saucers. Planets, rockets, and space stations dominated playgrounds. Stars and galaxies adorned the walls of schools. The streets were filled with slogans and posters saying, “Communists pave the way to the stars”.

• While previously the Soviet people had not shown much interest in meeting aliens, space exploration stimulated a creative class of Soviet people. Suddenly, alien themes became a popular topic in movies and animation. Scientists and cosmonauts were brought in as film consultants. Many ‘space’ films became instant Soviet classics.

• In the late 1960s and early 1970s when the Soviets and Americans made their first space flights, magazines were immediately filled with images of man in space. The scale of the artist’s imaginations became completely different, depicting massive star cities where people could live for years. A new avant-garde style emerged – vivid, futuristic and full of bright colors. Far off planets seemed like friendly, welcoming worlds.

• The traditional Soviet aesthetic was standardization and unification. It was almost impossible to introduce anything new. The space and defense industries, however, were areas in which new production was encouraged. Reflecting this openness, scientific and technical magazines would often provide sanctuary and ‘official’ employment to nonconformist, underground artists. In the 1970s, there was a shift in magazine design towards psychedelic graphics with unusual perspectives and more complicated characters and storytelling.

• By the 1980s, the space race was in decline (along with the Soviet Union itself). Not a trace of the dreams of the 1960s or the futurology of the 1970s remained. Soviet science magazines were in decline as well. The idealistic images had vanished. Illustrations became gloomier. Images were as realistic as possible, the colors less vivid. And the plots of stories centered on the everyday life of cosmonauts and scientists.

• Today, Russians no longer view space as an end in itself. It is now a means of survival where new sources of energy and technology may be found to address real modern issues, e.g.: the ecology, alternative energy, reasonable consumption, overpopulation, and waste recycling. The romanticism has vanished. Now, everyone sees the job of a cosmonaut or astronaut as basically the same as any other.

A tall stele rises from a deeply cratered surface, casting a long, ominous shadow past a row of smaller

towers. Straight lines connect the structures to each other, like streets on a map or the projected moves in a game of cosmic chess. The Earth floats serenely in the dark sky, next to the logo that reads Tekhnika—molodezhi, Russian for Technology for the Youth, a Soviet popular science magazine that launched in 1933. The magazine cover, from 1969, illustrated an article highlighting photographs from Luna 9, the Soviet unmanned spacecraft that was the first to survive a landing on the Moon a few years earlier.

This imagined moonscape is one of more than 250 otherworldly images

from the upcoming, visually delightful book, Soviet Space Graphics: Cosmic Visions from the USSR, by Alexandra Sankova, director and founder of the Moscow Design Museum, which collaborated on the book with her. Space Age artwork proliferated alongside the Soviet Union’s popular science magazines—there were up to 200 titles at their peak—during the Cold War. From the mid-1950s to the mid-1970s, in particular, the cosmos became a battleground for world

powers jockeying for global dominance. Though the Space Age began with the successful launch of the Soviet Union’s Sputnik 1, it was the United States that, just three years after Luna 9, first put a man on a moonscape like the one on the magazine cover.

Soviet illustrations, even ones with whizzing UFOs and bafflingly futuristic machines, were not drawn to entertain as much as to educate and promote the Communist project. An open letter from cosmonauts to the public in a 1962 issue of Technology for the Youth

labor (precisely labor!) makes the Soviet science and the Soviet man even more powerful, and brings closer that wonderful future—the communist future to which all humanity will arrive.” Scientists, astronauts, and aircraft engineers were treated like legends, since outer space was such an important idea in the Soviet Union, according to Sankova. “Achievements of the USSR in the field of space have become a powerful weapon of propaganda,” she says. Soviet citizens lived vicariously through such images, and even the more surreal and fantastical visuals—living in space, meeting new life forms—demonstrated that the idea of cultural revolution need not be limited to Earth.

What do you think informed or inspired these artists’ distinctive takes on other worlds?

Two directions served as an inspiration for the illustrations: the intensive development of the scientific and

technical sphere and the serious enthusiasm of designers and artists for new discoveries in various fields of science as a whole. Artists often had technical education. Another important factor that influenced the visuals was the upsurge of publications, books, novels, and short stories, and the production of science fiction films in the 1920s and the 1950 and 1960s.

Long before the dream of space flight came true, inventors and philosophers were convinced that travel between planets and even universes would become possible with time. In Russia, these ideas became widespread after the works of Konstantin Tsiolkovsky were published. In them, the scientist expressed his view that intelligent life must exist not only on Earth, but throughout the whole universe. Tsiolkovsky became famous not only for his work in engineering, but also for the conviction there must exist highly developed extraterrestrial civilizations capable of influencing the organization of matter and the course of natural processes, and for the aspiration to find a road to the cosmic intelligence and establish an organic connection between man and space.

Soviet writers had expressed the most unbelievable versions of encountering extraterrestrial civilizations. Then, in the 1970s and 1980s, space fantasy faded into the background, giving way to chronicles of the real space exploration program.