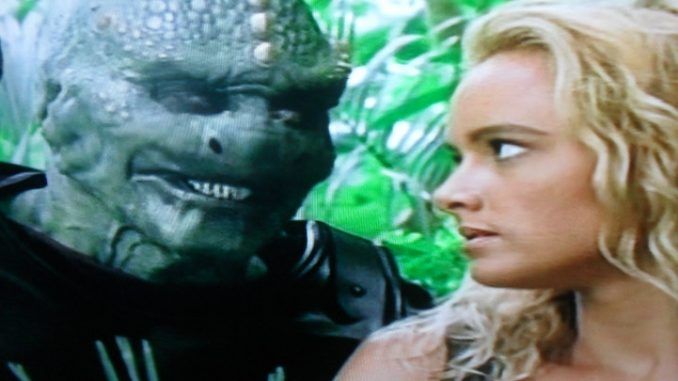 • Billy Corgan, the former lead singer of the band The Smashing Pumpkins revealed on an October 16th episode of The Howard Stern Radio Show that he witnessed a human shapeshift right before his eyes.

• Says Corgan, “I was with somebody once and I saw a transformation that I can’t explain. It’s a really messed up story.”

• Corgan: “Suddenly [I] turn around and there’s somebody else standing there.” Stern: “A different human? Did you say to the person, ‘What’d you just do here?’” Corgan: “Yes, and they acknowledged it.” Stern: “And what did they say they were? From another planet?” Corgan: “They wouldn’t explain.”

For whatever reason, more and more actors and celebrities have been coming forward lately with stories of encounters with UFOs, ghosts, or even Bigfoot. The paranormal seems to be back in style, and perhaps celebrities are merely capitalizing on the current zeitgeist in order to get their name in the headlines. Whatever the case may be, this week’s celebrity paranormal story comes from William Patrick Corgan, the artist formerly known as Billy Corgan and former member of ‘90s alt-rock pioneers The Smashing Pumpkins. Corgan was on The Howard Stern Show this week to promote his new album Ogilala when the interview turned towards Corgan’s many appearances on that loud, angry guy’s conspiracy nutjob radio show. You know the one.

As it turns out Corgan is a vocal believer in some of the more fringe conspiracy theories including all sorts of anti-vaccination claims, mass media brainwashing, and of course good ol’ fashioned chemtrails. During this recent interview, as Stern pressed Corgan on what exactly his alleged paranormal or unexplained experiences have been, Corgan revealed that he once witnessed a human shapeshift right before his eyes:

Let’s just say I was with somebody once and I saw a transformation that I can’t explain. It’s a really messed up story. It’s up there with one of the most intense things I’ve ever been through.

Corgan was pretty tight lipped about what exactly he witnessed, but given his favorite conspiracy theorist/radio host’s obsession with the so-called “lizard people” who secretly rule the world, there’s no telling what Corgan saw – or thinks he saw:

Corgan: Imagine you’re doing something and suddenly you turn around and there’s somebody else standing there.
Stern: A different human?

Corgan: Sorta. It’s hard to explain without going into detail–I’d rather not go into details.
Stern: But did you say to the person, “What’d you just do here?”
Corgan: Yes, and they acknowledged it.

Stern: And what did they say they were? From another planet?
Corgan: They wouldn’t explain.

Corgan claims he was totally sober during the experience. Is this another case of a celebrity (arguably) past his prime trying to stir up headlines (and succeeding), or could Corgan have truly witnessed a skinwalker/ shapeshifter? The problem with nearly all of these types of stories is that they usually only have one witness, and eyewitness testimony is rarely considered reliable evidence.
I dunno though, dude looks like he knows a skinwalker when he sees it.

This is the video version of the article, “Slave Colony on Mars Claim goes Mainstream” published on exopolitics.org on July 2, 2017.

The popular Infowars.com website has today released another article debunking an upcoming BBC documentary examining alien invasion theories and the London Olympics. In his article, “The Aliens are Comingâ€ Jurriaan Maessen argues that including information about extraterrestrial life in prospective false flag operations is an aspect of â€œpredictive programmingâ€ whereby the alternative media is discredited by the mainstream media focusing on the â€œwildestâ€ of â€œconspiracy theories.â€ Maessen was preceded by Paul Watson on June 30 who argued that introducing the “public toxic issues of UFOs and aliensâ€ into research on false flag operations would ultimately discredit the 9/11 and 7/7 truth movements. By launching a preemptive strike against the upcoming BBC conspiracy theory special, Maessen and Watson hope to debunk claims of an alien invasion theory during the Olympics. A sensible position to take given the paucity of information that such an event could really occur. Yet, they and Infowars.com are effectively inflicting collateral damage on long standing research efforts to reveal an extensive international official cover-up of extraterrestrial life, and how this influences geopolitics â€“ a relatively new international disciplinary approach called “exopolitics”. In effect, Infowars.com has declared war on the field of exopolitics entering into alternative media discourse on false flag events, in an effort to debunk an improbable alien invasion theory of the London Olympics.

Maessen sums up his argument against alien conspiracy theories as follows:

Recent attempts by mainstream media to discredit all â€œconspiracy theoriesâ€ by focusing on the wildest among them, appears to be a deliberate effort on the part of the controlled mediaâ€¦. All the producers (and the executives who have final say in the editing room) have to do is a more or less wides sweep of the internet, have lunch, sift out the â€œalien connectionâ€, and then highlight those theories as â€œmainstream among the substream.â€ (O miraculous deception!).

Maessenâ€™s point is pretty clear. There is little substance to conspiracy theories on a governmental cover up of extraterrestrial life â€“ theories belonging to the burgeoning field of exopolitics. Echoing Paul Watsonâ€™s June 30 article focusing on an upcoming BBC documentary that examines rumors of an alien invasion during the London Olympics, Maessen continued: â€œThe same principle applies to the countless theories floating around the web in regards to an expected cosmic event set to occur when the Olympic Games are in full swing.â€

In his earlier article, Watson argued:

The BBC is focusing its new documentary about â€œconspiracy theoristsâ€ around the premise that aliens will invade London during the Olympics. This entire meme is clearly being pushed by the establishment to discredit the truth movement.â€ Maessen agrees and argues: â€œthe alien connection is being pushed by the establishment to divert attention away from the documented reality of false flag operations and to undermine those exposing them.

The implication here according to Infowars.com is that exopolitics research needs to be ghettoized and sifted out of the alternative media in order not to contaminate genuine research on 9/11 and 7/11 as false flag operations.

The position taken by Watsonâ€™s and Maessenâ€™s boss at Infowars.com on the alien issue and false flag events, is more nuanced. According to Alex Jonesâ€™ take on the movie Prometheus, the global elite (Illuminati) not only believe in extraterrestrial life, but claim to be the direct descendents of ancient aliens that invaded and took over the Earth millennia ago. Jones argued in a video review of Prometheus that it was important to understand the Illuminati belief system in order to assess their global agenda. Jones was keen to point out that he did not share this belief, but this did not assuage critics who attacked Jones as selling out and becoming a â€œtrue believerâ€ of the UFO issue. Jones has earlier gone on the public record to support claims that a false flag UFO invasion has been planned and is possible. Yet it appears that Jones is tacitly agreeing with Watson and Maessen that a UFO false flag event for the Olympics is a distraction, or in Maessenâ€™s terms â€œpredictive programmingâ€

In rejecting any link between the fields of exopolitics/UFO research and false flag operations, Maessen, Watson and Infowars.com more generally are committing a grave mistake. The literature on a government cover up on extraterrestrial life is extensive and compelling. Very recently, Chase Brandon, a former CIA clandestine officer and official media liaison confirmed publicly on air that he had witnessed files in the CIAâ€™s historical archive that confirmed that UFO Roswell crash really happened:

I went into the side room and looked at all those boxesâ€¦ I only had a chance to look at one â€“ I pulled the one down that said â€˜Roswellâ€™ and I looked insideâ€¦ there were materials, there were papers, there were other items…. I absolutely knowâ€¦ that there was a craft from beyond this world that crashed at Roswell, that the military picked up remains of not just the wreckage but cadavers and all of that was made public for a short whileâ€¦

Brandonâ€™s testimony may prove to be as compelling as that of Philip Corso (ret. Lt Col) who headed the Foreign Technology Desk at the US Armyâ€™s Research and Development Division who claimed that he was given a file of Roswell UFO artifacts to stimulate corporations in the development of a range of technologies, e.g., Fiber Optics, Lasers, Kevlar fabrics, etc.

In a 2006 article examining Alex Jones and others examining 9/11 as a false flag event, I pointed out:

9-11 authors fail to identify a number of key exopolitical factors behind false flag operations. These factors have to do with the political management system created for extraterrestrial affairs; the technology and knowledge about extraterrestrials that are located on the territory of different foreign governments; and with the â€˜black budgetâ€™ needed to finance covert operations based on acquiring extraterrestrial technologies and information. Given the highly classified nature of extraterrestrial affairs, all these activities occur without any congressional or legislative oversight in the US and other major nations such as Britain, Russia and China.

I find it high unlikely that an alien invasion of London will take place during the Olympic games. Maessen and Watson, however, err greatly in claiming that efforts to combine research into false flag events and extraterrestrial life is part of an official effort to undermine the 9/11 and/or 7/7 truth movements. The fact that the BBC is examining alien invasion theories may rightly raise suspicions over the agenda of such programming, but in claiming that exopolitics/UFO research undermines the truth movement Watson and Maessen go too far. A more nuanced position is needed here â€“ echoing some of the insights of their boss at Inforwars.com, Alex Jones on a UFO false flag event and global elite belief systems about extraterrestrial life. Declaring war on exopolitics research and its relevance for the 9/11 and 7/7 truth movement is not only wrong but it serves another agenda. The cover-up on extraterrestrial life and technology goes back more than sixty years and has created an enormous shadow over geopolitics and international finance. The cover-ups about 9/11 and 7/7 are relatively recent and have occurred under the shadow of a larger geopolitical agenda. Jones, Watson and Maessen have brought up some aspects of this agenda and deserve credit for that. They need, however, to go deeper. In attempting to debunk expolitcs/UFO research and dismiss it from alternative media investigations on 9/11 and 7/7; Watson, Maessen and Infowars.com have declared war on the wrong target.