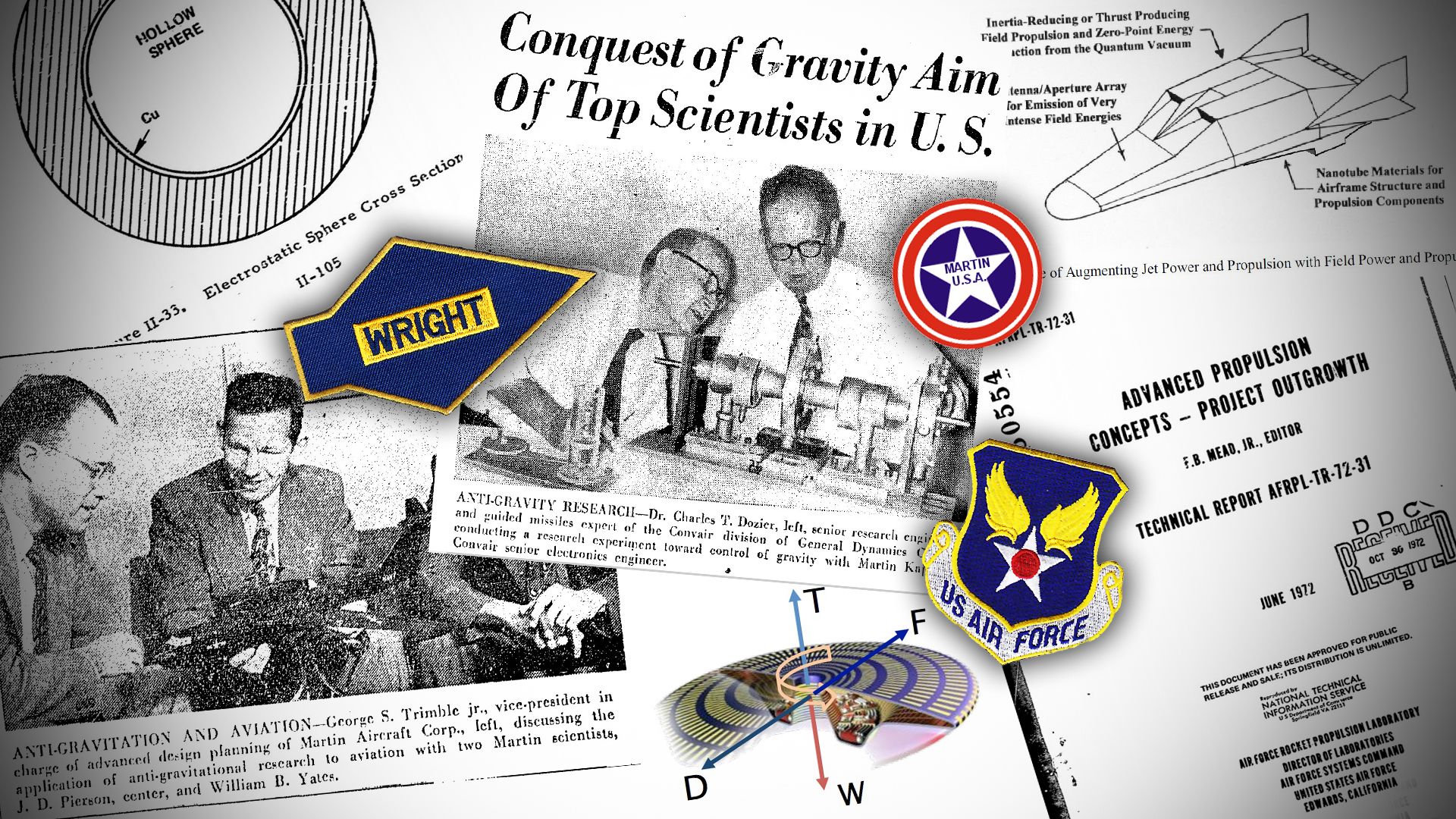 Listen to “e153 The Truth Is the Military Has Been Researching “Anti-Gravity” For Nearly 70 Years” on Spreaker.

• For the better part of a century, the most advanced laboratories under control of both the armed forces and the academic world have been trying their best to harness “anti-gravity” and extremely advanced next-generation propulsion technologies. The U.S. military and the federal government have been formally researching these radical concepts since the 1950s, and according to research by “The Warzone” on TheDrive.com website, those efforts have continued to this day. And since this information comes from unclassified sources, there is definitely more than just what is represented here.

• In 1956, the New York Herald Tribune published a series of articles by Ansel Talbert naming research institutes that were studying the secrets of anti-gravity in the 1950s by focusing on electromagnetism, high speed rotation, and various methods of reducing an aircraft’s mass. Nearly every major aerospace company at the time was involved in some way with researching “the gravity problem”: Convair, Lear, Sikorsky, Sperry-Rand Corp., General Dynamics, and Avro Canada. While some of the brightest minds in aerospace engineering and physics were devoted to studying gravity at the time, no working anti-gravity technologies ever came from these endeavors. Talbert noted that “the biggest deterrent to scientific progress is a refusal of some … scientists to believe that things which seem amazing can really happen.”

• Grover Loening was the first aeronautic engineer hired by the Wright Brothers. After a forty year career, he was decorated by the United States Air Force for his work as a special scientific consultant. Said Loening, “I firmly believe that before long man will acquire the ability to build an electromagnetic contra-gravity mechanism that works.” “Much the same line of reasoning that enabled scientists to split up atomic structures also will enable them to learn the nature of gravitational attraction and ways to counter it.”

• The US Air Force established its own anti-gravity research project early on. Joshua N. Goldberg served as a research physicist at Wright-Patterson’s Aerospace Research Laboratories from 1956 to 1962 where dozens of theoretical studies were produced. Some have claimed, however, that the Air Force-funded laboratories were set up merely to investigate reports of Russian anti-gravity research as a result of ‘Sputnik’-shock”.

• Wright-Patterson’s anti-gravity research concluded in the early 1970s with the passage of the Mansfield Amendments that limited military funding of research to that which had a direct relationship to a specific military function. Following the Mansfield Amendments, the Department of Defense’s research strategy shifted more towards the proposal-grant model seen at university and private laboratories today. The scientists at Wright-Patterson moved on to long careers in academia where they continued their research for the Air Force.

• In 1972, Franklin Mead, then Senior Aerospace Engineer with the Air Force Aerospace Research Laboratories, published ‘Project Outgrowth’ – a technical report discussing advanced propulsion concepts ranging from traditional rocket propulsion to “anti-gravity propulsion”. Two main approaches to anti-gravity in the report were “gravitational absorption” and a “unified field theory” which unites electromagnetism and gravitation. Mead and his group believed that these types of breakthrough propulsion concepts may be possible once materials sciences caught up with concepts developed in theoretical physics.

• In 1988, a New York lab submitted a concept report to the US Air Force at Edwards AF base which discussed the Biefield-Brown effect, where electrical fields produce propulsive forces. In 1989, a similar report explored the interactions between gravitational, electrical, and electromagnetic fields, resulting in the ‘Mach effect’. It also explores the concept of inertial mass variation using a rotating cylinder filled with mercury. While much of the research cited is still in its infancy, says the report, “… chemical propulsion is reaching its theoretical limits and nuclear propulsion has political difficulties.’ …[I]t is more likely that gravitational and electromagnetic studies will lead to future breakthroughs… (as well as) more recent low temperature fusion work.”

• A 2006 study compiled at the request of the US Air Force Research Laboratory and published by the American Institute of Physics claimed that next-generation propulsion may be achieved sometime within the next three decades. The study predicts that power systems will come in the form of field propulsion by inducing mass fluctuations using high-frequency electromagnetic fields.

• With the recent announcement of a partnership between the ‘To the Stars Academy’ and the US Army, the Army plans to explore the same principles the USAF has studied for decades: mass manipulation, electromagnetic metamaterial waveguides, and quantum physics.

• In 1996, NASA invited some of the brightest minds in physics and aerospace engineering to propose radical new ideas to propel spaceflight into a new paradigm. The program’s director, Marc Miller, noted that “it is known from observed phenomena and from the established physics of General Relativity that gravity, electromagnetism, and space-time are inter-related phenomena” that “…have led to questioning [whether] gravitational or inertial forces can be created or modified.”

• In 1997, NASA’s John H. Glenn Research Center at Lewis Field held a conference on breakthrough propulsion concepts with titles such as “Inertial Mass as a Reaction of the Vacuum to Accelerated Motion”, “Force Field Propulsion”, and “The Zero-Point Field and the NASA Challenge to Create the Space Drive”. Among the students attending the conference may have been Salvatore Cezar Pais, the inventor of the Navy’s recently submitted anti-gravity ‘UFO’ patents. Many of the concepts in Pais’ patents are similar to those which were researched at Wright-Patterson and other facilities in the 1950s and are still being explored today by academic and independent laboratories such as Lockheed Martin.

• A 2007 private sector publication found a connection between electric and magnetic fields, writing that there is a “possibility to manipulate inertial mass” and potentially “some mechanisms for possible applications to electromagnetic propulsion and the development of advanced space propulsion physics.” A 2010 Air Force-funded study at the University of Florida produced a “wingless electromagnetic air vehicle” with “no moving parts” and “near-instantaneous response time” that “was able to hover a few millimeters above the surface for (about three minutes)”.

• For years, various branches of the Armed Forces have been actively researching metamaterials that can propagate high energy electromagnetic fields. Navy budget documents show that between 2011 and 2016, the Navy conducted research into the “dispersion and control of electromagnetic waves in the microwave region, using fabricated metamaterial structures”. Starting in 2017, the Navy changed its project reporting to make it more difficult to know whether this metamaterial research continues today.

• The long and detailed history of interest by the U.S. military and the scientific community in this exotic field has resulted in significant amounts of research that spans nearly seven decades. All this occurred in spite of the fact that scientists realized as far back as the 1950s that the topic was largely taboo and often scoffed at by the larger scientific community.

• But anyone familiar with military research and development knows that there is a vast trove of projects, associated data, and technologies the public has yet to be shown and may never be shown. As the US Air Forces ‘Project Outgrowth’ document states: “We are just beginning to understand the true nature of space and to attempt to utilize this environment for our propulsion needs. …[N]ot until man truly becomes a creature of space will the restrictions imposed on his imagination be removed and radically new propulsion concepts devised.”

Decades-old questions about the potential existence of fantastical anti-gravity propulsion technologies have resurfaced following the Navy’s own disclosure of encounters with unidentified aerial phenomena and our own original reporting on a series of bizarre patents assigned to the U.S. Navy that seem to defy our current understanding of physics and aerospace propulsion. While the discussion continues over whether any such technologies are feasible, the truth is that the theoretical concepts behind them are anything but new. In fact, the U.S. military and the federal government have been formally researching these radical concepts since the 1950s, and according to our own research, those efforts have continued on to this very day.

In our dive into what seems like something of a bottomless rabbit hole of government studies into this exotic scientific realm, we have collected a body of research, news reports, and firsthand accounts. These establish the fact that the types of “anti-gravity”, propellantless propulsion, and mass reduction technologies described in the Navy’s recent “UFO” patents are at least based on more than 60 years of peer-reviewed research conducted and published by the likes of the American Institute of Physics, NASA, the American Institute of Aeronautics and Astronautics, and the Air Force Research Laboratory.

While we can’t say that any of this research led to actually being able to harness “anti-gravity” or extremely advanced next-generation propulsion technologies to any useful extent, the most advanced laboratories under control of both the armed forces and the academic world have certainly been trying their best to get there for the better part of a century. Also, keep in mind that all of this information comes from unclassified sources, and there is definitely more of it than just what is represented here. We can only wonder how much work has been done in the classified realm on what was once openly considered the next massive revolution in aerospace technology.

In terms of the Air Force’s early anti-gravity research, one intriguing first-hand account comes from Dr. Louis Witten, who was a professor of physics at the University of Cincinnati from 1968 to 1991. Throughout his career, Witten conducted research into gravitation, quantum gravity, and general relativity. The last one of these is the theory first put forward by Albert Einstein that proposes that gravity is essentially a warp or curve in the geometry of space-time caused by mass.

In his portion of the roundtable, Witten recalls being recruited by George S. Trimble, then serving as Vice President for Aviation and Advanced Propulsion Systems at the Glenn L. Martin Company, which evolved first into Martin-Marietta and eventually merged with Lockheed in 1995 to form Lockheed Martin. The project for which Witten was recruited would come to be known as the Research Institute for Advanced Studies (RIAS) and was officially founded in 1955 by George Bunker, president of Martin, with the goal of advancing aerospace science and development.

“The vice president [Trimble] had the wonderful idea which was to develop anti-gravity,” Witten says, noting he immediately balked at the proposal. “When he tried the idea in public, you can imagine the greeting he received from scientists. So he said to himself ‘those poor bastards, I’ll show them.'” Despite his skepticism, Witten ended up accepting Trimble’s offer to join the powerful Martin executive’s pet project.

Throughout his short speech given at the roundtable, Witten says that even though he faced ridicule within the scientific community for his research, there was no shortage of people who would tell him they knew how to achieve anti-gravity.