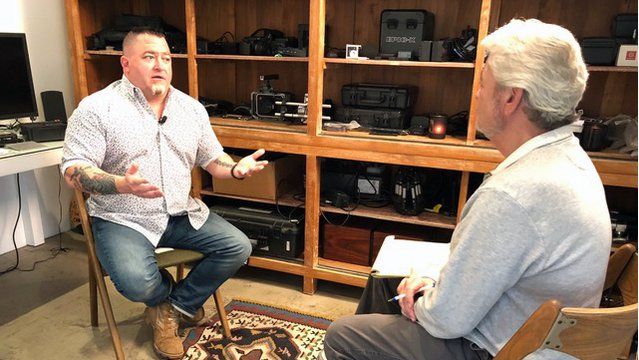 The Physics of UFOs: “If This Was a Court of Law, We Are Beyond a Reasonable Doubt.”

• The above is a quote by Luis Elizondo in a recent interview by George Knapp and the I-Team Las Vegas (pictured above). Elizondo was the director of the Pentagon’s $22M UFO research program until he retired to join Tom Delonge’s ‘To The Stars Academy’ to make public an F-18 cockpit video of a tic-tac shaped UFO and an accompanying New York Times article last December. The Pentagon program was authorized by Senator Harry Reid in conjunction with Bigelow Aerospace. Founder Robert Bigelow said in a ’60 Minutes’ (CBS) interview that the Earth is currently being visited by extraterrestrials, an opinion shared by Elizondo.

• Elizondo said, “…advanced physics and quantum mechanics…sudden and extreme acceleration, hypersonic velocities, low observability, trans-medium travel and… positive lift, or anti-gravity, is really a manifestation of a single technology …(that) we think we know…”.

• Fellow ‘Stars Academy’ member, physicist Dr. Hal Puthoff said in a recent radio interview that the tic-tac UFO created a ‘space-time metric’ “able to create their own space-time bubbles,” making it easy for UFOs to travel what humans perceive as impossible distances in a short period of time. Elizondo told CNN that the tic-tac UFO video doesn’t even compare with the other UFO footage that they plan to release.

• Dr. Thoedore C. Loder, Professor of Earth Sciences at the University of New Hampshire, predicted that revelations in propulsion technology will dramatically alter our 20th century view of physics and technology and must be considered in planning for both energy and transportation needs in the 21st century.

• The only real way the human experience can evolve and move forward is with total transparency. We are more than what we’ve been made to believe, and our capability and potential for good is far beyond anything we can imagine.

If this was a court of law, we are beyond reasonable doubt.” Those were the words of Luis Elizondo in a recent interview by I-Team Las Vegas and George Knapp (as seen in the picture). Last October, Elizondo ended his long career with the U.S. government, and with one of his most recent positions being the director of the Pentagon’s study of unknown aerial objects (ATTIP), he definately knows a thing or two about the subject. The program was authorized by Harry Reid, a former U.S. Senator in conjunction with Bigelow Aerospace.

Not long ago, the founder of Bigelow aerospace told the public (in a 60 minutes interview) that we are not alone, and that Earth is currently being visited by extraterrestrials. Elizondo also shared his belief that there is a lot of evidence showing that we’re “probably not alone, whatever that means.”

Elizondo is part of the To The Stars Academy, headed up by Tom Delonge, the company that the US Government is working with to disclose the existence of UFOs to the American public, as well as the exotic technologies that go with them. They are the ones the Pentagon went through to spread the release of their UFO footage.

The company’s team also has Hal Puthoff, a co-founder of the US Government’s Stargate Progam, a 25 year program that investigated parapsychological phenomena.
When Elizondo made the court of law statement, he was referring to the scientific data, and more, we now have showing that something strange has been going on in our atmosphere for a very long time. He’s also gone on the record, stating that.
“For the first time, we have a compelling picture that what we are seeing is explained in our current understanding of physics, advanced physics, and quantum mechanics… perhaps all these observables that we have been seeing, for example: sudden and extreme acceleration, hypersonic velocities, low observability, trans-medium travel and last but not least positive lift, or anti-gravity, is really a manifestation of a single technology. So it’s not five exotic technologies we’re trying to figure out how it works. It’s one and we think we know that one too.”

An article published on the To The Stars website states as follows,
“One of the scientists that helped figure it out is physicist Dr. Hal Puthoff. He wrote the proposal that helped Bigelow land the [DoD] contract to study UFOs and in a recent radio interview, said he commissioned 38 scientific papers during the study to explore exotic propulsion ideas, including what he called “spacetime metric engineering.” In essence, the Gimbal and Tic-Tac craft were able to create their own spacetime bubbles.”

One of the first statements Steve Justice (mentioned above) made using the To The Stars platform is that, when it comes to the technologies he’s been around, worked with, and seen, it would be an understatement to call them revolutionary.

He also stated, while discussing the concept for the craft that To The Stars plans to build, the following:
This is a concept for an international point-to-point transportation craft that will erase the current travel limits of distance and time. It mimics the capabilities observed in unidentified aerial phenomenon by employing a driver system that alters space-time metric. We have glimpses of how the physics of this works, but we need to harvest technologies from the Science Division to “realize” the capability.