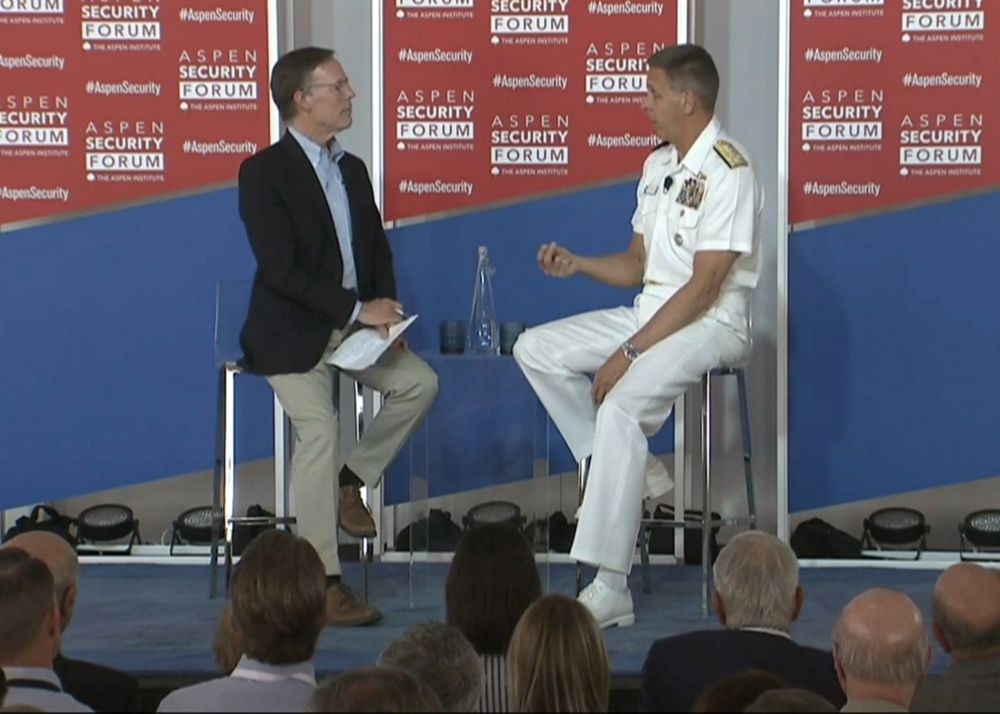 • On July 19th, Politico’s defense editor, Bryan Bender, moderated a panel at the Aspen Institute’s annual Aspen Security Forum, in Aspen Colorado. Bender has been following the recent UFO developments at the nation’s capital, and he broke the story regarding the US Navy developing new guidelines for reporting UFOs.

• Four-Star Admiral Philip Davison (pictured above at the forum), the commander of the US Indio-Pacific Command, was also on the Aspen Security Forum panel. When an audience member asked Admiral Davidson about the recent UFO reports, Davidson replied that the UFO events occurred during “a finite period,” according to a tweet from Bryan Bender. This indicates that the Admiral is aware of issues surrounding the UFO activity beyond what has been reported in the news. What does he mean when he says that the encounters were during “a finite period?”

• Navy pilots have briefed lawmakers and military leadership on two separate encounters with UFOs: one that occurred over several days in November of 2004 off of the coast of San Diego when, after seeing odd objects on radar, the USS Nimitz carrier strike group scrambled its jets to engaged an object described as looking like a 40-foot long white ‘Tac Tac’. The second encounter was off of the East Coast during 2014 and 2015, when radar from the USS Roosevelt carrier strike group picked up odd readings, and Navy pilots described a ‘clear ball with a cube in it’ passing in-between two fighter jets. Navy radar also picked up similar readings over the Middle East.

• Is this span from 2004 to 2015 the finite period Admiral Davidson was talking about? Could there be even more Navy UFO cases that the public is not aware of? Bender thinks Davidson might have suggested that Navy pilots only spot UFOs occasionally, and it isn’t something that happens a lot. Tyler Rogoway of The Drive’s War Zone said that Davidson’s comment that UFO activity ceased after 2015 seemed accurate, noting that Navy pilot Ryan Graves never specifically says they encountered UFOs in the Middle East, only radar signatures.

• Rogoway also notes that in both of these instances, cutting edge radar sensor technologies were deployed, which “may point to the possibility that these events were tests of highly exotic and secret technology belonging to the US military or even deployed by its adversaries.” “[If Navy] aircraft… were testing new sensor technologies, the possibility would exist that someone else was testing how these sensors would react to their next-generation propulsion technology,” suggesting that the technology allowing craft to perform “flying maneuvers that shatter our perceptions of propulsion, flight controls, material science, and even physics” was developed right here on Earth.

• Last May at the McMenamins UFO-fest in McMinnville Oregon, the Navy pilot who encountered the “Tic Tac” UFO off of San Diego in 2004, David Fravor, told his audience that he thought he might have encountered secret advanced military technology. However, as the years went by and this technology never came to light, Fravor began to doubt that idea. He felt that he would have heard something about this new development if it indeed existed.

• When the subject of UFOs of extraterrestrial origin was broached at the Aspen conference, the defense reporters and industry insiders who made up the majority of the audience just laughed. It is obvious that the military community is not ready to take the topic of extraterrestrial UFOs seriously. Rogoway called this reaction from his colleagues “disgusting.” However, the conspiracy-minded could very well say that both Admiral Davidson and Tyler Rogoway are seeding doubt as part of the Navy’s UFO investigation strategy to steer the press and the public away from aliens as a genuine explanation for these UFO sightings.

During a panel at last month’s Aspen Institute’s Aspen Security Forum, an audience member asked Admiral Philip Davidson about reports of UFOs. Davidson replied that the Navy has new UFO reporting guidelines and that the UFO events occurred during “a finite period.”

This information comes via a tweet from Politico’s defense editor, Bryan Bender. Bender has been following recent UFO developments at the nation’s capital. He broke the story regarding the U.S. Navy developing new guidelines for reporting UFOs, and appeared on the History Channel’s Unidentified: Inside America’s UFO Investigation.

Bender moderated a panel at the forum on Friday, July 19. However, on Thursday, he tweeted: @AspenSecurity asks @INDOPACOM commander about Navy reports of UFOs. Chuckles all around but Adm. Phil Davidson responds that there is now a reporting process for these unexplained sightings and says the encounters were during ‘a finite period.’”

Four-Star Admiral Philip Davison is the commander of the U.S. Indio-Pacific Command. What I find interesting is that he was aware of the UFO issue, and apparently more than just the recent news about new reporting guidelines. But, what did he mean when he said the encounters were during “a finite period?”

History’s Unidentified revealed that Navy pilots involved with two separate incidents briefed lawmakers and military leadership. The first encounters occurred over several days in November of 2004. The Nimitz carrier strike group caught odd objects on radar. The Nimitz scrambled jets and Wing Commander David Fravor engaged an object he described as looking like a 40-foot long white Tac Tac. After a short time, the object darted off at an incredible speed.

The second set of encounters covered on Unidentified were similar. In this case, it was the USS Roosevelt carrier strike group that encountered odd radar readings off the coast of Florida in 2014 and 2015. At one point, a UFO described as a clear ball with a cube in it passed in-between two jets. According to the show, the objects followed the USS Roosevelt to the middle east.

These encounters span from 2004 to 2015. Is that the finite period Davidson was talking about? Could there be even more Navy UFO cases that the public is not aware of?