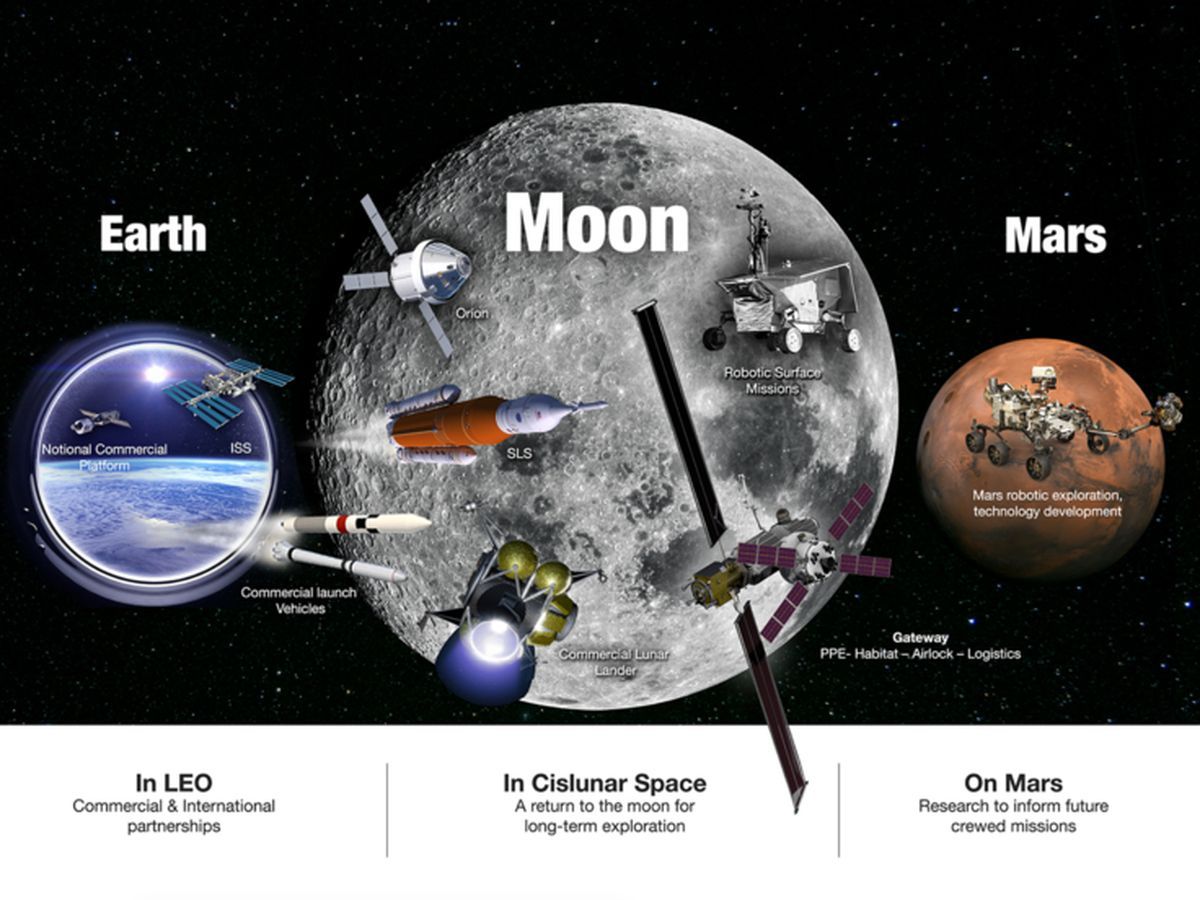 • On July 23rd, the White House released a new National Space Council report entitled, “A New Era for Deep Space Exploration and Development”, which outlines how various government agencies, as well as international and commercial partners, will play a role in implementing a national space policy to include a return to the Moon and human missions to Mars.

• The report, requested in August 2019 by Vice President Mike Pence as chairman of the National Space Council, builds on an existing ‘SPD 1’ policy directive and a 2018 National Space Strategy which calls for a sustainable return to the Moon and “peace through strength in the space domain.” It’s not just about NASA or Space Force. It’s about an integrated approach to space exploration and development.

• To accomplish this, the report identifies five roles for the government: a) to create a “secure” space environment with space traffic management; b) support commercial activities in space; c) fund the research and development of key space technologies; d) back space-related scientific activities; and e) being a “reliable customer” to the private space industry by investing in space infrastructure.

• The report outlines how existing policies will be implemented by NASA and other government agencies such as the Departments of Commerce, Defense and Transportation. Providing an idea of how the US government should proceed in the development of space should prove useful when forming international partnerships. “This is hopefully a useful communications tool for dialogue with other space agencies, expressing strategic intent,” said one government official.

• A ‘Users’ Advisory Group’ argued for more attention to academia in the strategy, which was later incorporated into the report. NASA feedback led to more discussion about ‘Low Earth Orbit’ commercialization.

• But the report warns against moving ahead too quickly. “Some people argue that humanity is destined to develop space settlements and become a ‘multi-planetary species,’” the report states. But in order to develop space commerce and habitation, we first need to develop both the technical knowledge of the use of space resources as well as economic rationales to sustain such settlements. “At present, we do not yet know if any of these conditions are possible,” the report concludes.

WASHINGTON — A new National Space Council report argues that the exploration and development of space must be an integrated effort that involves not just NASA but other government agencies, as well as international and commercial partners.

The report, “A New Era for Deep Space Exploration and Development,” released July 23 by the White House, is intended to outline how various government agencies will play a role in implementing national space policies, including a human return to the moon and eventual human missions to Mars.

“Although NASA is, and will remain, the primary United States Government entity for civil space exploration efforts, other departments and agencies have increasingly important roles to play in space,” the report states.

The report builds on existing policies, in particular Space Policy Directive (SPD) 1, which called for a sustainable return to the moon led by NASA with various partners, as well as a 2018 National Space Strategy, a broader space policy document that called for “peace through strength in the space domain.”

A senior administration official, speaking on background, said that the new report was intended to emphasize an integrated approach to space exploration and development. “A lot of people weren’t aware of how our approach on space was not just about NASA, not just about Space Force,” the official said. “The point of the report was to build on SPD-1 and also to paint a whole-of-government picture about what we were doing.”

To carry out that strategy, the report identifies five major roles for government: promoting a “secure and predictable” space environment that involves both addressing space traffic management as well as regulatory reforms, supporting commercial activities in space, funding research and development of key space technologies, investing in private space infrastructure by being a “reliable customer” and backing space-related scientific activities.