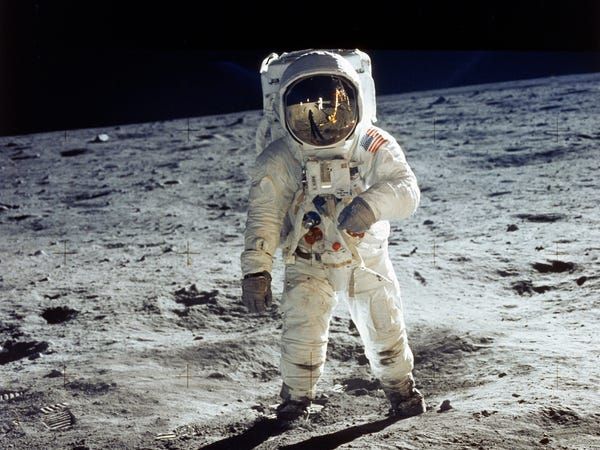 • In 1962, President John F Kennedy called for a mission to the Moon, calling it a “new frontier”. On July 20, 1969, NASA astronaut Neil Armstrong realized this dream as he became the first man to set foot on the Moon, followed by pilot Buzz Aldrin 19 minutes later. As Armstrong famously proclaimed, “one small step for man, one giant leap for mankind”. Armstrong, Aldrin and the pilot, Michael Collins, returned to Earth as heroes.

• But what if the 1969 Moon mission was not a success? In his book Shoot For The Moon, author Jim Donovan revealed how NASA prepared for the worst-case scenario. “I discovered that the Moon landing was even more dangerous than anyone outside Mission Control knew,” writes Donovan. “When the primitive Apollo Guidance Computer – with just 72kB of memory and a processing speed millions of times slower than today’s average smartphone – began to blare alarms at 40,000ft it took incredible skill on the part of the controllers not to abort the entire mission.”

• There were 18 different plans in place if something went wrong. Collins kept a notebook with all 18 emergency procedures pinned to the front of his space suit. If something went wrong, Collins was ordered to leave Armstrong and Aldrin on the Moon to die. Writes Donovan, “Collins developed tics in both eyes at the thought of being unable to retrieve his two comrades and having to turn homeward and leave them on the Moon or circle it until they perished.”

• One the day of the actual mission, Collins said he was “sweating like a nervous bride” waited for Armstrong and Aldrin to get in touch. He believed if he had to return to Earth alone he would be a marked man for life.

• Knowing the risk of disaster, NASA had President Richard Nixon’s speechwriter, William Safire, prepare the words for such an eventuality: “Fate has ordained that the men who went to the Moon to explore in peace will stay on the Moon to rest in peace.”

In 1962, President John F Kennedy called for a mission to the Moon. It was, he said, a “new frontier”. Talk of frontiers

was a throwback to the nineteenth century, but it made a certain sense.

The prospect of claiming the Moon – vast, uninhabited, strategically useful and mineral-rich – is precisely the sort of thing the would have made the world conquerors of old salivate.

British arch-imperialist Cecil Rhodes once mused: “I would annex the planets if I could. I often think of that.”

NASA astronaut Neil Armstrong eventually realised this dream to some extent 51 years ago, on July 20, 1969.

He became the first man to set foot on the Moon, followed by pilot Buzz Aldrin 19 minutes later.

As he took his first steps on the lunar surface, Armstrong uttered the now immortal phrase “one small step for man, one giant leap for mankind”.

And after Armstrong, Aldrin and the pilot who had taken them to the lunar surface, Michael Collins, returned to Earth all three were given a hero’s welcome.

The mission was hailed a huge success – but it could have been very different.