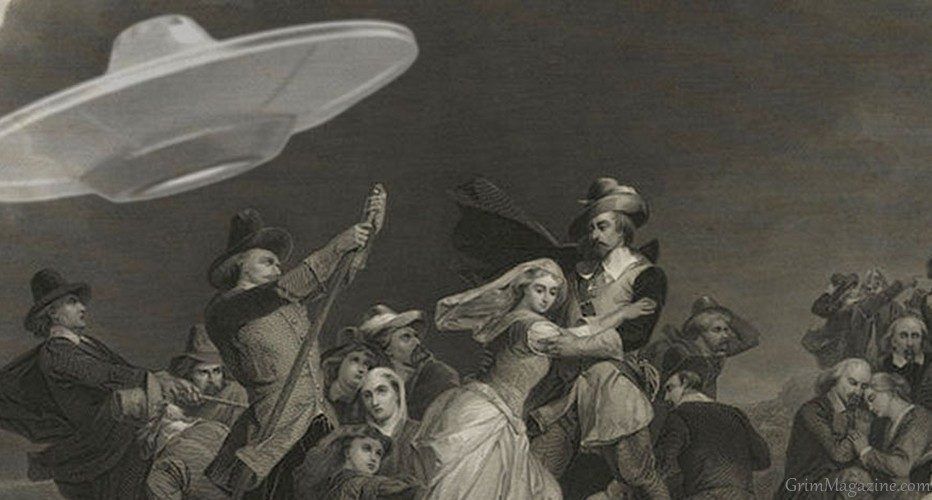 • In 1639, the Massachusetts Puritan, John Winthrop, wrote in his journal an account of one of his men, James Everell, which occurred on the dark evening of March 1st. Described as a ‘sober’ man, Everell and two other men were on a river in a rowboat. Suddenly, a light lit up the night sky and appeared to “flame up”. The bright object, estimated to be about nine feet in diameter, remained stationary in the sky. Then it would speed off ‘in the figure of a swine’, according to Everell. The entire event was said to have gone on for hours with the light darting back and forth above them. The distance the light flew back and forth between was a span of roughly two miles. This eyewitness account was confirmed by other eyewitnesses in the area.

• When the light finally faded, the men in the boat found themselves a mile upstream with no idea as to how they arrived there. None of them had any memory of having rowed themselves in that direction. Some speculated that the boat drifted with a strong current or wind. However, others believe that there was something even more unexplainable at work.

• Five years later, Winthrop recorded another incident in his journal. This encounter occurred in Boston in January of 1644. Around midnight, three men were rowing into Boston harbor when they saw lights emerging from a cave in the shape of a human being. The lights then flew over town before vanishing into thin air. Later that week at 8 o’clock in the morning, a light ‘as bright as the Moon’ rose over Boston harbor before joining with another. The two lights converged and split several times, according to Winthrop’s account, before flying out of view and disappearing into the night. Winthrop noted that the lights sometimes ‘flamed’ and sometimes ‘sparkled.’ Even more astonishing, a disembodied voice accompanied the lights, saying ‘Boy! Boy! Come away! Come away!’ – repeating twenty times. Then it occurred again, two weeks later, with the same voice bellowing on the other end of Boston town.

encounters although they may have described things a bit differently than we do today. Rather than watching an episode of Ghost Hunters on TV or scanning through an article just like this one on the internet, the first-ever recorded accounts of anything suspicious were written down in things such as journals. Rarely, they would make it in the village paper, and often, stories of the unknown would be spread through town via word of mouth.

One such account is actually that of early settler John Winthrop in 1639 and it has proven to have been the first known account of something seemingly extraterrestrial. While the Puritans certainly didn’t refer to these things as UFOs or strange beings as ‘aliens,’ his account, for all intents and purposes, is quite interesting… and it’s not the only one from that time.

March 1, 1639: The Encounter
For starters, we must remember that during the 1600s, things such as jet engine planes and military craft were not in existence (at least, not to the knowledge of the common people). Therefore, spotting anything in the sky that wasn’t a star or potentially a planet was shocking, as satellites certainly didn’t exist then, either. This is why on a particularly dark spring night during 1693, the account by John Winthrop was so chilling. Among stories of early Puritan life, Winthrop recorded an incident during which a man by the name of James Everell and two others had been out on a rowboat on the river when a light lit up the night sky. Everell was described as a ‘sober’ man, according to History.com, therefore his word was not to be taken lightly.

The light they saw appeared to ‘flame up’ and was estimated to be roughly three square yards. After it lit up the sky and remained stationary for a short time, Everell’s account says that it sped off ‘in the figure of a swine.’ Interestingly, the entire event was said to have gone on for hours with the light darting back and forth above them. The account takes an even stranger turn, however, when it’s alluded to that the men were actually momentarily abducted – or at least, that’s what it would have been called in today’s age. Since the distance the light flew back and forth between was a span of roughly two miles, this eyewitness account was confirmed by other eyewitnesses in the area, as well.