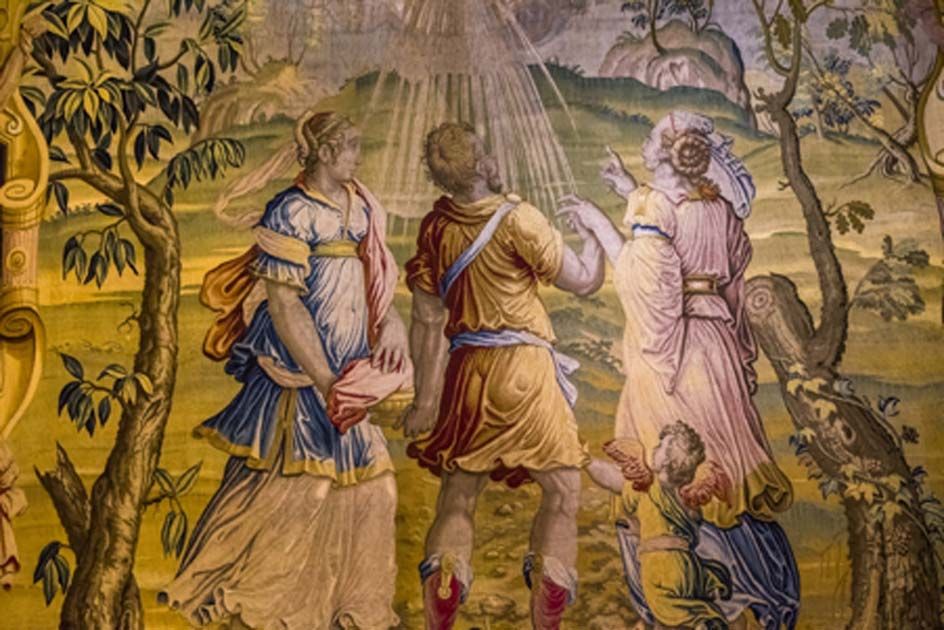 Ancient Artists Left Signs For us to Decode. Did they Witness UFOs?

• In the Notre Dame Basilica in Beaune, France (Burgundy) there are two medieval tapestries known as “The Life of the Virgin Mary” and “Magnificat” (1330 AD), both of which contain a UFO in the sky. (see images below) The Bayerisches National Museum in Munich, Germany features the tapestry “Summer Triumph” (1538 AD). Almost hidden in the background are black discs or UFOs in the blue sky. (see image below)

• In 776, the Saxons were raiding Frank (French) territory on a regular basis. When the Saxons besieged the Frisdilar Chapel, they tried to burn it down. Suddenly two men dressed in white appeared in the sky. The Saxons were not able to set the structure on fire, and upon seeing the men in white suspended over the chapel, they ran away except for one who died at the foot of the chapel. Then during the Saxon’s Battle of Sigiburg Castle, two flaming shields appeared to hover over the castle church. Again, the frightened Saxons retreated. These events were chronicled in tapestries depicting crusaders reacting to objects in the sky with light or energy emitting from them. (see image below)

• The Urbinate Bible is the most famous document from the Renaissance period relating to the Holy Scriptures, and is kept in the Vatican museum. Among the beautiful images in this Bible is ‘Saint Geremia’s Contemplation’. In the top right of the landscape is a round body emitting blazing rays and a straight yellow beam of light, like a laser beam. (see image below)

• The medieval Franks and Saxons took the appearance of a luminous object in the sky as a sign of protection by God. Modern people would see it as an extraterrestrial UFO or secret military aircraft. The Franks took for granted that the luminous discs represented knights being driven to battle. Did the “flaming discs” appear by chance, or did they intend to influence the outcome of the battle? Did ‘outside forces’ want Charlemagne to win and create a dominant Christian-based society? What would our civilization look like today if the ‘pagan’ Saxons had prevailed?

• [Editor’s Note]   See more examples of medieval and Renaissance references to UFOs in the 10:22 minute video of 10 Ancient Pictures below.

Did ancient artists leave us clear signs of otherworldly interference in our lives and in our culture?

Art can be considered a record of history, culture, and science as it reveals man in his many aspects, offering a more complete insight and a unique viewpoint. Since the beginning of man, humans have always felt a need to reproduce celestial events, first on the walls of caves and then on canvas. It is not the case that history, art, archaeology, and anthropology were rewritten in art, but these interpretations should be viewed in light of new elements whose existence had not previously been suspected.

In eastern France, Cote d’Or department, in the little town of Beaune, (the wine capital of Burgundy), there is the Notre Dame Basilica . The original building was constructed about 1120-1149. Inside, besides frescos of the 15th century, there is a library that houses a set of tapestries from the 15th to the 18th centuries.

Among them, the eyes of an attentive observer are struck by “The Life of the Virgin Mary” and “Magnificat”, two medieval tapestries which are part of a group of five of important moments in the Virgin Mary’s life.

In both of these tapestries there is one unidentified flying object ‘flitting’ across the sky in the background. Even in “Magnificat”, made in 1330, this black object is depicted in the typical way of many UFO sightings.

But there are many who state they are priest hats. But logic asks why include floating and lonely ecclesiastic hats in the sky?

Therefore, it is reasonable to wonder, considering the historical period, whether personal experiences or popular stories could have influenced an artist to include an odd event in the depths of a sacred image, hoping in this way to increase a halo of mysticality.

There are discs or UFOs which cannot be mistaken for ‘priest hats’ – given they do not fly in ‘religious skies’. A good example is the tapestry “ Summer Triumph ”, depicting allegoric and symbolic images of the season.

This tapestry certainly was part of a series that originally depicted the four seasons. It is not known if any of the other tapestries have survived. This tapestry, (perhaps created in Bruges), is located at the Bayerisches National Museum in Munich, Germany, which unfortunately has little information about it. They do know it was brought to the museum in 1971 by an art dealer. There was no information about the workshop, the designer, the patron, or the circumstances of its production.

The date 1538 is woven into the border on both the right and the left sides of the tapestry. In the upper border, there is an inscription in old Latin saying: “REX GOSCI SIVE GUTSCMIN”. This translates as “King Gosci of Gutscmin”. If this is a hint to the patron who ordered the tapestry to be made, nobody knows for sure.

As usual, almost hidden in the background, there are some black discs or UFOs in the blue sky.

Dr. Birgitt Borkopp from the Bayerisches Museum, in a letter sent to the author, states that “As the style of the tapestry is rather unusual, even for its period, I would doubt if this is the right object to illustrate the history of art, but of course this is your decision entirely.”

Of course, she wasn’t aware that the link between UFOs and history in art is discussed in many books and articles. It is interesting to note strange or unusual art generally is not considered with curiosity by the ‘experts’ and they seem to prefer to ignore them.

The Tapestry of the Two Crusaders

An interesting example that displays ‘knowledge ahead of its time’ is what was written about the images of the two crusaders in the ” Annales Laurissenses ” (books about historical and religious events), composed in the beginning of the 8th century.

In 776, during one of the innumerable raids of the Saxons in Frank territory, an odd event happened. While Charlemagne, in a rare moment, was resting from battle and devoting himself to the cause of the Holy Church, the Saxons left their lands with a great army and invaded the Franks.

They reached the chapel at Frisdilar, founded by Saint Bonifacio, preacher and martyr who had predicted the chapel would never be burned. The Saxons surrounded the chapel, entered it and started to set it alight. But at the very last moment, two men dressed in white appeared in the sky. They were seen by the Christians who had taken refuge in the castle and by the pagans who were outside.

The two men were said to have protected the chapel from the fire. The pagans were not able to set fire to it, neither inside nor outside, and this terrified them so much they ran away – even though no one was pursuing them.