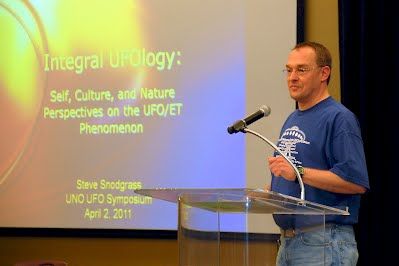 Integral Theory (a highly comprehensive, multi-paradigm-connecting theory created by philosopher Ken Wilber) is slowly transforming how different academic fields are understood and practiced from a narrow, mutually competing sense to a mutually nourishing and transdisciplinary sense. In today’ s complex world in which planetary-wide problems are taking hold, previous partial or reductionist approaches are proving less and less effective every day. Among these planetary-wide problems (like economic collapse, ecological degradation, global security, disappearing cultures and possible pandemics caused by resistant viruses) we have an exopolitical problem. How are we going to deal intelligently with the ever more evident extraterrestrial presence affecting the entire world?  Well, at least in relation to the field of Ufology, a more intelligent way of studying evidence is emerging by making use of concepts such as the “Four Quadrants” of Ken Wilber’s Integral Theory.

While researching for an upcoming article on how Exopolitics might benefit from Integral Theory, I found that social scientist Steve Snodgrass, LCSW (director of the Omaha UFO Study Group) is developing an intelligent extension of Ufology using that theory. In fact, this is a trend that will affect many academic and non-academic fields of knowledge. As Dr. Michael E. Salla, Snodgrass finds that it is necessary to utilize the methods of the social sciences along with those of the hard sciences. He wrote these and other ideas in a work published on October, 2010 titled “Integral UFOlogy: A Rubric for Evaluating Extraterrestrial Contact.”

My upcoming article will focus on how Ken Wilber’s Integral Theory could be useful to Exopolitics, but Steve Snodgrass' application of this theory to Ufology and to its ongoing search of evidence is commendable. Both Ufology (usually) emphasizing evidence and Exopolitics (usually) emphasizing political processes are increasing their approaches to understanding by including both qualitative and quantitative methods and the resulting complexity (more suitable for today’s complex demands) could be better undertaken with the simplifying and universally applicable organizing pattern offered by Integral Theory. Snodgrass’ work, presented at the 2011 UNO-UFO Symposium at the University of Nebraska-Omaha is a welcome, creative move toward a necessary and inclusive approach suitable for the XXI century and beyond. A good link to his elucidation can be found here.

In relation to Exopolitics (which deals not just primarily with evidence but with Earth-based and alien-based political, social-scientific and paradigmatic implications of the extraterrestrial presence and with itself as a political movement) Integral Theory can also clarify this complex matter as –in order to study exopolitical situations and phenomena- a pattern with universally recurring elements is offered. Some of these elements are: four distinctive and irreducible perspectives, their eight methodological “zones,” several “lines” or evolutionary capacities, multiple stages of development, typologies, states of consciousness and even (a consideration which I give more credence to) the existence of several interacting realms of existence. Thus, Exopolitics (already developing as an inclusive field of research with real-world political applications) can be further supported and nourished by a content-free, wide-ranging model which is already being applied to different academic fields. The book Integral Theory in Action, edited by Sean Esbjörn-Hargens, PhD as well as the work by many professionals at Integral Institute shows that Integral Theory is not only generating a more complete form knowledge that relates disciplines in a transdisciplinary manner but also expanding the applicability of particular fields such as medicine, psychology, politics, business, education and ecology.

Former Presidenty Bill Clinton also gave a statement of support for Integral Theory in the 2006 meeting at Davos. Furthermore, in 2008 the State of the World Forum established by Jim Garrison and Michail Gorbachev adopted Integral Theory as its organizing framework. More is to come as academicians (already dissapointed with postmodernity and perhaps already thinking or sensing life in holistic terms or beyond), other political leaders and people in general catch up with this historical developmental "wave" which not only deals with concepts and “theory” but -evolutionarily speaking- also reflects a larger emerging sense of being with respect to an intelligently organized Cosmos teeming with Life.