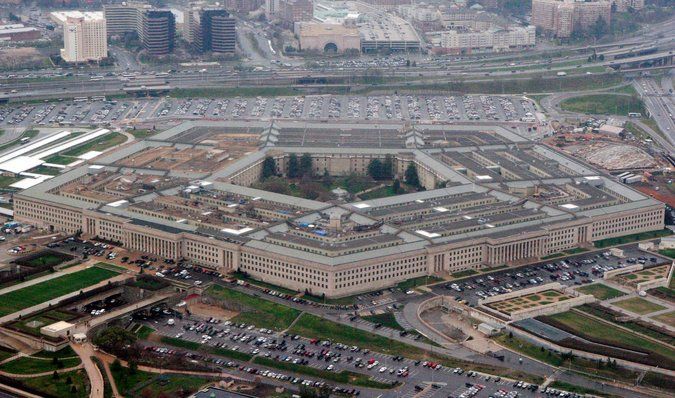 • Hidden in a $600 billion Pentagon budget in 2007 was $22 million set aside for the “Advanced Aerospace Threat Identification Program”. The program, run by military intelligence official, Luis Elizondo on the fifth floor of the Pentagon’s C Ring, was ‘defunded’ in 2012. But officials say that the program has secretly continued through the US Navy and the CIA.

• The UFO research program was initiated by Nevada Democrat, Harry Reid, who tapped long-time friend, Robert Bigelow of Bigelow Aerospace in Las Vegas, to run the program. In May 2017, Bigelow said on CBS’s “60 Minutes” that he was “absolutely convinced” that aliens exist, and that UFOs have visited Earth. But Reid said that UFO sightings were not often reported because military service members were afraid they would be laughed at or stigmatized.

• In 1947, the Air Force began to study UFOs, and in 1951 initiated the now infamous ‘Project Blue Book’ which ended in 1969, concluding that most sightings involved stars, clouds, conventional aircraft or spy planes, although 701 reports remained unexplained.

• “Internationally, we are the most backward country in the world on this issue,” Mr. Bigelow said in the CBS interview. Harold E. Puthoff, an engineer who also worked on the Pentegon program and has researched extrasensory perception for the CIA, agreed with Bigelow saying, “Our scientists are scared of being ostracized, and our media is scared of the stigma. China and Russia are much more open and work on this with huge organizations within their countries. Smaller countries like Belgium, France, England and South American countries like Chile are more open, too. They are proactive and willing to discuss this topic, rather than being held back by a juvenile taboo.”

• Both Elizondo and Puthoff have now quit the government and joined Tom DeLonge’s new UFO disclosure initiative ‘To the Stars Academy’, speaking publicly about their efforts and raising funding for UFO research. Elizondo said that the UFO phenomena does not seem to originate from any country. “That fact is not something any government or institution should classify in order to keep secret from the people.”

WASHINGTON — In the $600 billion annual Defense Department budgets, the $22 million spent on the Advanced Aerospace Threat Identification Program was almost impossible to find.

Which was how the Pentagon wanted it.

For years, the program investigated reports of unidentified flying objects, according to Defense Department officials, interviews with program participants and records obtained by The New York Times. It was run by a military intelligence official, Luis Elizondo, on the fifth floor of the Pentagon’s C Ring, deep within the building’s maze.

The Defense Department has never before acknowledged the existence of the program, which it says it shut down in 2012. But its backers say that, while the Pentagon ended funding for the effort at that time, the program remains in existence. For the past five years, they say, officials with the program have continued to investigate episodes brought to them by service members, while also carrying out their other Defense Department duties.

The shadowy program — parts of it remain classified — began in 2007, and initially it was largely funded at the request of Harry Reid, the Nevada Democrat who was the Senate majority leader at the time and who has long had an interest in space phenomena. Most of the money went to an aerospace research company run by a billionaire entrepreneur and longtime friend of Mr. Reid’s, Robert Bigelow, who is currently working with NASA to produce expandable craft for humans to use in space.

On CBS’s “60 Minutes” in May, Mr. Bigelow said he was “absolutely convinced” that aliens exist and that U.F.O.s have visited Earth.

Working with Mr. Bigelow’s Las Vegas-based company, the program produced documents that describe sightings of aircraft that seemed to move at very high velocities with no visible signs of propulsion, or that hovered with no apparent means of lift.

Officials with the program have also studied videos of encounters between unknown objects and American military aircraft — including one released in August of a whitish oval object, about the size of a commercial plane, chased by two Navy F/A-18F fighter jets from the aircraft carrier Nimitz off the coast of San Diego in 2004.

Mr. Reid, who retired from Congress this year, said he was proud of the program. “I’m not embarrassed or ashamed or sorry I got this thing going,” Mr. Reid said in a recent interview in Nevada. “I think it’s one of the good things I did in my congressional service. I’ve done something that no one has done before.”

Two other former senators and top members of a defense spending subcommittee — Ted Stevens, an Alaska Republican, and Daniel K. Inouye, a Hawaii Democrat — also supported the program. Mr. Stevens died in 2010, and Mr. Inouye in 2012.

While not addressing the merits of the program, Sara Seager, an astrophysicist at M.I.T., cautioned that not knowing the origin of an object does not mean that it is from another planet or galaxy. “When people claim to observe truly unusual phenomena, sometimes it’s worth investigating seriously,” she said. But, she added, “what people sometimes don’t get about science is that we often have phenomena that remain unexplained.”

James E. Oberg, a former NASA space shuttle engineer and the author of 10 books on spaceflight who often debunks U.F.O. sightings, was also doubtful. “There are plenty of prosaic events and human perceptual traits that can account for these stories,” Mr. Oberg said. “Lots of people are active in the air and don’t want others to know about it. They are happy to lurk unrecognized in the noise, or even to stir it up as camouflage.”

Still, Mr. Oberg said he welcomed research. “There could well be a pearl there,” he said.
In response to questions from The Times, Pentagon officials this month acknowledged the existence of the program, which began as part of the Defense Intelligence Agency. Officials insisted that the effort had ended after five years, in 2012.

“It was determined that there were other, higher priority issues that merited funding, and it was in the best interest of the DoD to make a change,” a Pentagon spokesman, Thomas Crosson, said in an email, referring to the Department of Defense.

But Mr. Elizondo said the only thing that had ended was the effort’s government funding, which dried up in 2012. From then on, Mr. Elizondo said in an interview, he worked with officials from the Navy and the C.I.A. He continued to work out of his Pentagon office until this past October, when he resigned to protest what he characterized as excessive secrecy and internal opposition.

“Why aren’t we spending more time and effort on this issue?” Mr. Elizondo wrote in a resignation letter to Defense Secretary Jim Mattis. 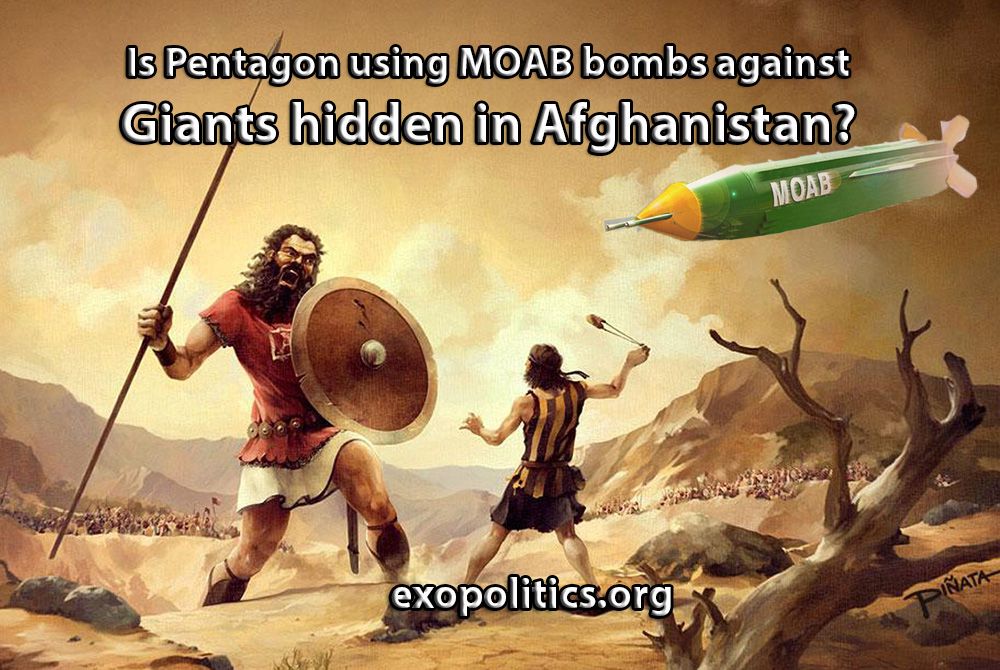 On April 12, the U.S. Air Force dropped the largest conventional bomb in the Pentagon’s arsenal to flush out Islamic State terrorists according to official Pentagon reports. However, insider testimony suggests another reason for the use of the MOAB bomb. The undisclosed goal is to flush out, capture or destroy giants hiding in Afghanistan’s ancient cavern system who possess technological secrets going back to the origins of human civilization.

Is the Pentagon anticipating an alien invasion?

American Professor says US military has a contingency plan.

Toronto, Canada [ZNN] Professor Paul Springer from the U.S. Air Command and Staff College has been authorized by his employers to discuss US military plans to respond to an alien invasion.

Springer’s statement, according to research by Dr. Michael Salla of the Exopolitics Institute, reveals that the Pentagon does indeed have contingency plans in place to react to an alien invasion.

The fact that a US government agency like the Pentagon would entertain such a scenario could be considered a reaction to documentation by former military personnel that craft of unknown origin have been captured on radar and have indeed intruded upon restricted air space over nuclear installations.

The Pentagon’s alien invasion contingency plan also appears to contradict the US Air Force stated position that no intrusion by craft of unknown origin – reported, investigated or evaluated – was ever an indication of a threat to national security.

Why an academic of high standing like Professor Springer has been permitted to speak out is unknown – although recent events involving surveillance of ICBM nuclear installations by craft of unknown origin and a growing list of commercial and military pilot sightings of UFOs may be factors in a Pentagon decision to leak information through an accredited professional, thus linking alien intelligence with unacknowledged national security priorities. Dr. Salla states, “…Springer reveals that the Pentagon acknowledges the importance of thinking through the many national security issues surrounding the possible existence of extraterrestrial life and technology.”

Furthermore, in the midst of an on-going effort by the US government to deny the presence of extraterrestrial intelligences, it is more than perplexing why public statements about an alien invasion plan would surface on Australian television, while receiving little or no media coverage in the United States.

When asked about these plans, one UFO research expert stated: “These plans represent a military mind-game designed to incite fear and uncertainty among an uninformed public. Two major issues need to be answered; first, when will the US government realize that well over half of Americans polled believe their government is engaged in a cover-up? Secondly, citizens are mature enough to engage in discussions about the reality of UFOs and extraterrestrial beings. Once these questions are addressed, a responsible and authentic public dialogue will emerge.”

The spokesperson went on to say, “Regrettably, while the Pentagon continues to deny UFOs are real – a military style of cowboy-diplomacy and a foreign policy entrenched in the 1940’s demand they shoot first and ask questions later.”

Read the assessment by Dr. Michael Salla about the Pentagon plan to deal with an alien invasion at:Â http://exopoliticsinstitute.org/news/index.php/21370/ (The Australian TV news interview of Professor Springer is also available at this site.)

[ED. NOTE: Journalists, editors, investigative television and radio news program producers and other members of the press interested in becoming apprised of these critical issues are invited to contact the ZlandCommunications NewsNetwork. All communications will be kept in the strictest confidence.]