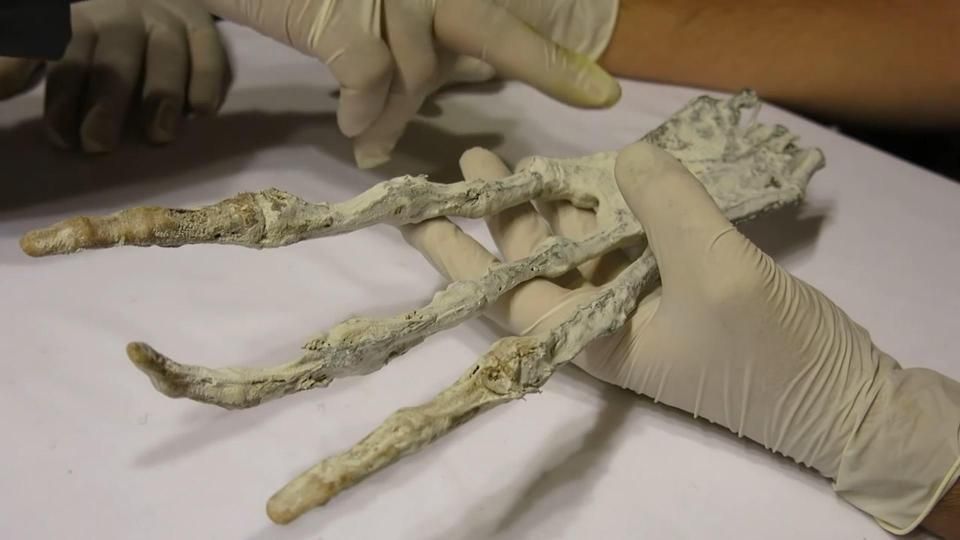 Some images of alleged humanoid remnants (including X-rays) safeguarded at Instituto Inkari in Cuzco, Peru. I think that other remnants are kept elsewhere as well.

Image of a presumably well-preserved skeleton with unknown characteristics. Notice a round object on the left 3-fingered hand.

A skeleton inside one of the alleged mummified samples, also with Instituto Inkari. is this a genuine original biological mummy from a formerly living being or a fabricated one?

The larger (5 foot 6 inches) mummy (now considered to be a female humanoid) has been given the name of “María.” Forensic anthropologist Dr. José Salce points out that she has 3 fingers in each hand and 18 phalanxes in each hand. That would be 6 phalanxes in each of her 3 fingers.  The question is whether they were made to fit to perpetrate a hoax or whether they fit naturally and whether they would have been functional.
Human hands only have 14 phalanxes in each hand. It would have been difficult to tamper with a normal mummy and add phalanxes that seem to fit perfectly well in this particular case.  The white powder covering her doesn’t seem to be chalk or gypsum. The internal organs are preserved, including what seems to be a good portion of the brain and these organs don’t seem to have been tampered with. Peruvian reporter Jois Mantilla (physically present with the team of scientists that arrived with Gaia TV and Mr. Maussan) recently informed in Dr. Anthony Choy’s radio program that “María” doesn’t seem to have a vagina or anus, the forearm appears to be missing one human bone and the femur appears to be joined to the hip through tendons. Also, the Peruvian surgeon Edson Salazar considers this a case worth investigating with a careful attitude, also thinking that adding extra fingers would have been very difficult due to the embracing position the mummy displays.
There allegedly is another mummy that has eggs inside her as shown through X rays and/or CAT scans. Perhaps humanoid and reptilian like or like the equidna and platypus mammals.  On July 11 this and other information will be revealed first in Lima, Peru and thereafter in Mexico and in the U.S. Many scientists are extremely skeptical or havent shown much interest.
We must try to avoid ad hominem and a priori, disqualifying accusations and focus upon sincere and adequate research!  And share this information truthfully with the public!
Side view of alleged humanoid female mummy now being called Maria. Covered in a white dust material that according to the research team associated with Gaia and Mr. Maussan is not plaster.

X ray of one of the larger hands (not from Maria but another sample). It is rejected by paleontologist Dr. Roberto Salas Gismondi in a report here in Spanish. He asserts that this sample and all the other samples and mummies do not make any anatomic, functional or evolutionary sense.   He also adds MC letters and other indications to the X Ray to show that this hand shows metacarps that are being mistakenly counted as phalanxes because the hand has been altered. Several experts should consider looking into this. Here is the link https://www.sophimania.pe/ciencia/dinosaurios-paleontologia-y-arqueologia/cientifico-sobre-la-momia-de-nazca-ninguna-de-las-manos-tiene-sentido-anatomico-funcional-o-evolutivo/

ALSO POSTED IN FACEBOOK ON JULY 8.  A RECENT skeptical DECLARATION BY AN IMPORTANT GROUP OF SCIENTISTS ABOUT THE ALLEGED MUMMIES. I HOPE THAT FURTHER RESEARCH AND DIALOGUE IS PROMOTED BETWEEN SCIENTISTS ASSOCIATED TO GAIA, MR. JAMIN AND MR. MAUSSAN AND THESE AND OTHER SCIENTISTS (IT IS IN ENGLISH AND SPANISH)
I share these declarations to promote further investigations and a serious scientific DIALOGUE. Here is the link. https://www.facebook.com/wcoms/posts/804089006431344:0
Alleged male and female humanoid mummies. The female one appears to have a slightly bloated belly. The X Ray shows what seem to be pregnant with eggs withing the belly of the female mummy. Posted by investigative journalist Fernando Correa in his Facebook page.