Pyramids in Russia: Towards a Universal Pattern Community

On December 2015, I heard Mr. Valery Uvarov at the IV UFOZ conference organized by A.J. Gevaerd in Brazil and then interviewed him. I had met Mr. Uvarov before at the First International UFO Congress in 1991. Mr. Uvarov has been a UFO researcher known for working with contactees but also with other mysteries such as possible paleo historical traces of extraterrestrial activities in the far-flung past. For several years he’s also been involved with pyramid technology and in the construction of large-scale experimental pyramids  and, more recently, in a project to build an intentional community that could enhance human evolution in current and upcoming generations.
For several years, Mr. Uvarov was not only active experimenting with the construction of several large pyramid structures in Russia but was also involved with research projects that have allegedly experimentally honed better ways to build these artifacts.
There’s a developing tradition of building large pyramids in Russia. Dr. Alexander Golod has also been a pioneer of this pyramid research and construction in Russia.

A well-known 144 foot pyramid built under Dr. Alexander Golod’s concepts in 1999
The practical benefits of pyramids that work would be many, such as healing cancer besides positive transformative resonant effects in the human organism, consciousness and mind.  Allegedly, after at least 15 years of research, some scientist members of the Russian Academy of Science have verified many non-conventional effects produced by specifically designed and aligned pyramids and I’d say that IF these are also scientifically verified by peers around the world, humanity could soon be engaging in a practical large-scale demostration of the conscious use of a science based on universal, integrative, multi-level energy patterns. Moreover, it would be reasonable to assume that these multi-level energy patterns are recognized and utilized by many advanced extraterrestrial beings throughout the cosmos.
According to Mr. Uvarov, ET craft are abundant around the world, manifest at specific cyclical times and for the most part (unless having technical difficulties) just travel too fast or at a time rate that renders them normally invisible to the najed eye. Some of the pyramids built in Russia would have already attracted them but they can only be seen if filmed at high speeds and then by slowing down the video. Apparently, in order to ‘travel’ from one place to another, ET civilizations would make transitions between “chrono fields” (time fields) using crossing points between “time corridors.” These “corridors” would be policed by a neutral exopolitical force. Some of this can be read in Mr. Uvarov’s reply to General Alexey Savin’s comment about why extraterrestrials do not openly contact humanity.
According to Mr. Uvarov, the Russian government doesn’t have an official information suppression policy and has never told him to stop researching. moreover, issues such as “extraterrestrials” and “pyramid power” seem to be less of a taboo among formal Russian institutions.
Allegedly, according to Mr. Uvarov, an adequately built pyramid is a model of a human being’s (and the universe’s) energy structure and is a way to collect and generate cosmic energies on a variety of planes of existence. Since Earth human beings would have a unique energy pattern related to Earth’s history and other characteristics, extraterrestrials would also be interested in “reading” or decoding a person’s energy fields.
In “Project 12,” located near the city of Tomsk, medical institutes, hotels, kindergartens, other schools and projects will be combined with 33 pyramids that allegedly correct and enhance the human energetic structure, learning, creative abilities, the immune system and consciousness.
Fifteen minutes away from the City of Tomsk, in the Russian Siberia more than 120 hectares have been reserved for building a pyramid complex and alternative community. It might be located in an area with a natural kind of energy vortex.
Financing the 500 million dollar project (which began contruction in 2011) would be an important food distributor for the Siberian region. He wants to positively influence the development of new generations in Tomsk and also to distribute food that has been treated in the pyramids.
Project 12 is currently under construction and will possess 33 pyramids in toto and 12 major integrated aspects:  An integrated pyramid complex; education and development of special abilities in adults and new generations of Russian children (including creative capacities and psychic abilities); a health and medical center including conventional and alternative approaches; healthy and organic agriculture; food supplements production; beekeeping/apiculture; water energizing; solar and wind energy; a residential settlement; an inn for guests; and a botanical garden and zoo.
The complex is designed around a large central, 18-metter high pyramid structure itself containing 25 pyramid-shaped ‘chambers’. This structure is  said to be 10 times smaller than the Great Pyramid in Egypt. After many years of scientific and alternative historical research (allegedly including working with Russia’s “National Security Academy”) pyramids are built by combining several crucial details (such as placing a large quartz crystal in its foundations surrounded by a 12-sided wall, using specific minerals, using solid walls, a large bronce bell for resonance effects in its main hall, a quartz pyramid top or “pyramidion,” and a unique alignment 15 degrees off from the North towards Greenland). The large quartz crystal in the basement is a crucial part of the pyramid’s energy source and in contact with running liquid water. Allegedly there also are ways to avoid the negative energies which also  naturally flow upwards from the Earth.
Clockwise and anti-clockwise subtle but effective energy flows are described. However, some construction details remain secret because – as Mr. Uvarov says – they can also be used to generate psychotronic warfare effects.
Mr. Uvarov mentioned that the Cheops pyramid is active 49 days of the year but that the central pyramid in Project 12 would be active every day of the year. 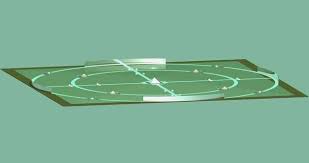 Project 12 is designed with 3 concentric (Atlantis-like) rings with the central 18 meter-high pyramid interconnected to the other pyramids at the rings.
Mr. Uvarov also wants to build a network of strategically placed pyramids around the world in order to modify what could be called the “mental information field” (the noosphere?) and re-align the planet’s subtle energy grid, also diminishing or “dampening” earthquake activity.
If all of this is verified and a project of planetary consequences were to take place, it would be a conscious effort that (to ‘visiting’ and/or interacting and observing extraterrestrial civilizations) could signal a greater degree of maturity on the part of humanity …in other words, it could also have exopolitical consequences and bring us closer to open interaction.
According to Mr. Uvarov, many temples and pyramids in the world (although mostly dismantled) are still aligned with an energy grid system distributing cosmic energy received and re-transmitted by Mount Kailash in the Himalayas.  A buddhist sacred calendar would show this mountain’s activity (which, although pyramid-shaped, is considered to be a receiver).
Mr. Uvarov states that there’s greater openness than in the West to alternative paleo history and extraterrestrial issues. He claims that at the “National Security Academy” interest in pyramid technology isn’t just for military purposes but also for the positive uses. He tells us that in that academy’s archives he saw secret UFO files that mentioned landings and interactions between ETs and military personnel and even showed that during WWII German submarines entered underwater tunnels in the Antartic eventually reaching a parallel reality. Allegedly, the entire journey of the latter expedition was clearly described.
Mr. Uvarov’s research indicates that there is historical encoded information given by an ancient civilization that existed in a planet known as “Maldek” once located between Mars and Jupiter. A civilization located in Mars would have also intervened. He also mentions that some ancient texts gave clues on technology given to correct the human energy system and its “inner biological time.”  There would be two time frames ( I suppose one of them is retrocausal and syntropic) and re-aligning them would not only prolong our biological lives with better health but align us with our mother planet Earth and with the cosmos…thereafter facilitating contact with the energy frequencies of extraterrestrial entities.