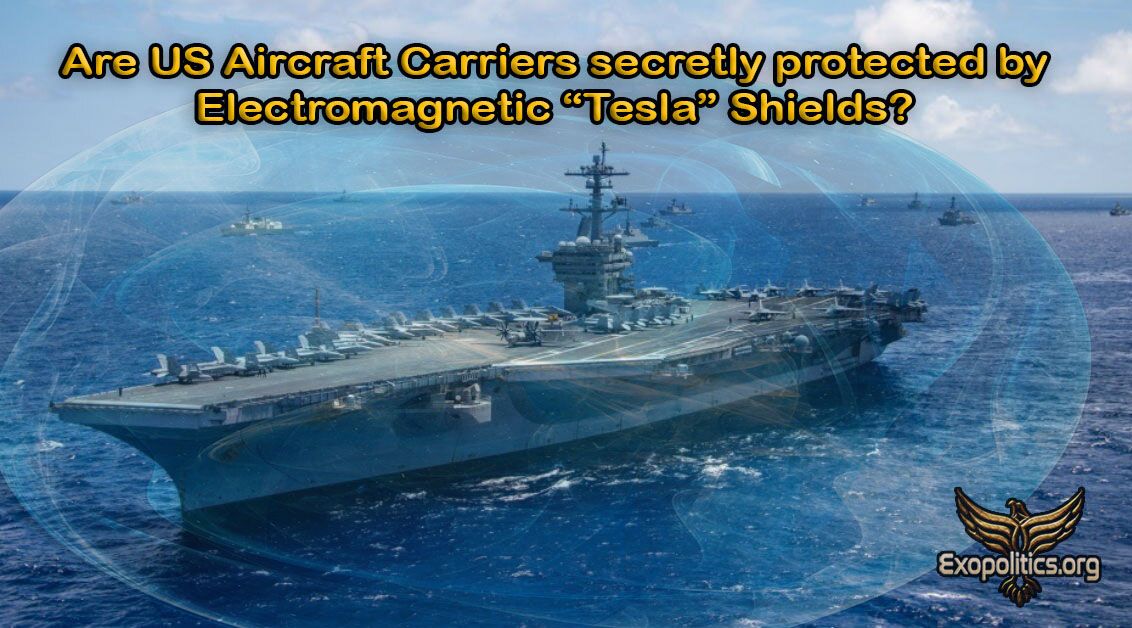 Are US Aircraft Carriers secretly protected by Electromagnetic “Tesla” Shields?

In January 2017, all U.S. aircraft carriers were recalled to their home ports for unknown upgrades. There has been much speculation about what the carriers had been secretly equipped with given the growing threats posed by hypersonic cruise missiles against which the carriers appeared defenseless. The 2018 release of a Navy patent provides a compelling answer to what had happened during the recall. The carriers were secretly equipped with powerful electromagnetic “Tesla” shields that could neutralize all hypersonic and ballistic missile threats.

In January 2017, several news reports appeared describing the recall of all US aircraft carriers to home ports and how for the first time none were actively serving anywhere in the world. On December 30, 2016, a Fox News report explained:

When the Navy was questioned by Fox News about the recall of all its aircraft carriers in the Middle East, a Navy spokesperson said:

“We are not going to discuss the timing of operational movements of carrier strike groups into and out of the U.S. Central Command area of responsibility,” said Capt. Terry Shannon, a U.S. Naval Forces Central Command spokesman, in a statement to Fox News. Centcom is tasked with control over all U.S. forces in the Middle East and Afghanistan.

The lack of explanation for the recall led to much speculation including some concluding that the recall was done to set up the US for a major false flag attack:

In what can only be described as a disproportionate appropriation of U.S. Navy assets, a blatant breach of standard protocol, and a possible set up for a false flag operation — the entire U.S. Navy aircraft carrier group, 10 active carriers, have returned to port and are now all sitting ducks.

By the end of January 2017, the Navy began redeploying its aircraft carriers and the recall was quickly forgotten. In order to understand why the aircraft carriers were recalled and what they may have been upgraded with, we need to consider the growing threat posed by cruise missiles capable of hypersonic speeds.

I first wrote about cruise missiles developed by Russia and China and sold to countries like Iran that could threaten aircraft carrier battle groups back in November 19, 2007. In an article titled: “The Neoconservative Agenda to Sacrifice the Fifth Fleet – The New Pearl Harbor,” I explained:

Iran has sufficient quantities of cruise missiles to destroy much or all of the Fifth Fleet which is within range of Iran’s mobile missile launchers strategically located along its mountainous terrain overlooking the Persian Gulf. The Bush administration is deliberately downplaying the vulnerability of the Fifth Fleet to Iran’s advanced missile technology which has been purchased from Russia and China since the late 1990’s. The most sophisticated of Iran’s cruise missiles are the ‘Sunburn’ and ‘Yakhonts’. These are missiles against which U.S. military experts conclude modern warships have no effective defense.

I further described the capabilities of the cruise missiles sold to Iran as follows:

The SS-N-22 or ‘Sunburn” has a speed of Mach 2.5 or 1500 miles an hour, uses stealth technology and has a range up to 130 miles. It contains a conventional warhead of 750 lbs that can destroy most ships. Of even greater concern is Russia’s SSN-X-26 or ‘Yakhonts’ cruise missile which has a range of 185 miles which makes all US Navy ships in the Persian Gulf vulnerable to attack. More importantly, the Yakhonts has been specifically developed for use against Carrier groups and has been sold by Russia on the international arms trade.

Over the subsequent decade, cruise missile payloads and speeds have increased to the extent that Russia has now developed missiles that can travel over five times the speed of sound. At his February 20, 2019 State of the Nation address, President Vladimir Putin public announced the existence of the first hypersonic cruise missiles, which the Pentagon determined had been under development and testing since 2015:

“This is a hypersonic missile called Tsirkon. It will have the speed of Mach 9, it has a range of 1,000 kilometers (620 miles) and can hit navy or land targets.”

In December, CNBC learned that a U.S. Intelligence report had highlighted testing of the Tsirkon hypersonic system, noting that five tests had been carried out by the Russian military since 2015.

Putin has previously described Russia’s hypersonic prowess as “invincible” and accused “those who have fueled the arms race over the last 15 years” of failing to contain Russia.

China is not far beyond Russia in developing cruise missiles capable of hypersonic speeds, and currently has a number of hypersonic ballistic missiles that can be deployed against aircraft carriers. On January 2019, Elizabeth Shim from UPI reported:

China Times and others reported Tuesday the Dongfeng-17 is a midrange rocket that could be used to sink an entire U.S. aircraft carrier, if it is fired eight times.

The threat posed by hypersonic cruise and ballistic missiles to aircraft carriers and their support ships is well understood by senior Navy leaders and researchers. According to a March 6, 2018 news story published in The Examiner:

The era of the American aircraft carrier as the premier embodiment of military might could be ending unless the U.S. develops defenses for the next generation of highly maneuverable, super-fast hypersonic weapons under development by Russia and China, the Pentagon’s top weapons researcher said Tuesday.

Michael Griffin, undersecretary of defense for research and engineering, said China is spending billions to develop a non-nuclear version of the weapons that could render U.S. aircraft carriers vulnerable to attack.

Despite the threat posed by increasingly sophisticated and powerful hypersonic missile systems under development by major geopolitical rivals, the US Navy has nevertheless gone ahead with building and deploying a new generation of aircraft carriers beginning with the USS Gerald Ford, which is scheduled to formally begin active service in 2022.

This brings us back to the question of why did the US Navy recall all its aircraft carriers in early 2017, and forge ahead with plans to build the larger and more expensive Ford-class carriers?

For an answer, we need to review a 2018 patent awarded to a Navy scientist, Salvatore Cezar Pai, which is titled: “The High Energy Electromagnetic Field Generator” (HEEMFG). In a previous article, I briefly described his patent as an electromagnetic shield. The patent’s summary describes one of the goals of the HEEMFG is to protect the Earth from potential asteroid impacts:

It is the HEEMFG’s ability to “deflect or destroy” fast traveling objects which directly pertains the question of why the Navy recalled all its aircraft carriers and is moving ahead with building more Ford-class carriers:

It is a feature of the present invention to provide a method and apparatus for generating an impenetrable defensive shield to Sea and Land as well as Space-based military and civilian assets, protecting these assets from such threats as Anti-Ship Ballistic Missiles, Radar Evading Cruise Missiles, Top Attack for Main Battle Tanks (land and sea based systems), as well as counteracting the effects of solar-induced Coronal Mass Ejections or defending critical military satellites in an ASAT role (space based system). [Source]

The development of an impenetrable electromagnetic shield to defend a target from fast traveling objects such as asteroids and missiles is very similar to ideas first proposed by the Serbian inventor Nikola Tesla back in the 1930’s, Tesla proposed an electromagnetic shield based on scalar wave principle which has been explained as follows:

Scalar Waves can be warped into a dome around objects, such as cities or houses… Such a Scalar Wave force field is generally known as a Tesla Shield, and it would be analogous to the “shields” referred to in the popular “Star Trek” series. Tesla Shields have a definite defensive application, and could not in any way be used for offensive purposes (although a platoon of soldiers charging into a Tesla Shield would be instantly disintegrated). The only defense from a blast of a Scalar Wave Howitzer would be a Tesla Shield.

The scientist behind the HEEMFG is no rogue inventor but works at the Naval Air Warfare Center Aircraft Division (NAWCAD) on advanced technology concepts. On two occasions, Dr. James Sheehy, the Chief Technology Officer of the Naval Aviation Enterprise, a US Navy affiliated organization, has intervened on behalf of Dr. Pais’ patent applications deeming them “operable” to skeptical patent examiners.

Brett Tingley, writing for The Drive, has given detailed commentaries on Pais’ patents, and has speculated about why the Navy wanted to make public what appeared to be technologies that would be highly classified if they worked. He speculated that the patent applications may be disinformation intended to deceive China and Russia:

[I]t’s certainly possible that these patents are part of some ongoing information campaign designed to make America’s competitors question what types of black budget research is currently underway at NAWCAD and other research organizations. With so many revolutionary new aerospace technologies on the brink of deployment, perhaps this is an attempt to essentially “weaponize” patents and sow doubt among our adversaries and even inject confusion among the American populous.

An alternative explanation offered by Tingley is that the patents are feasible and the Navy is seriously contemplating developing them based on UFO sightings such as the 2004 Tic Tac incident tracked by Navy pilots:

[M]aybe this is the Pentagon’s grasping attempt to try to make sense of and emulate mysterious and seemingly highly advanced craft that are supposedly being increasingly observed near its own aircraft, vessels, and installations. Maybe the Chinese competition claim is just a placeholder for the unknown.

There is yet another, even more compelling, explanation that Tingley did not consider. The patents are based on technologies that have already been successfully developed by the Navy in a classified program to protect current and future aircraft carriers from hypersonic weapons. After all, the Navy has a long track record in studying electromagnetic means for protecting its ships as evidenced by the 1943 Philadelphia Experiment.

Even more intriguing is recent insider and documentary evidence that the Navy has developed a secret space program that deploys kilometer long spacecraft that would almost certainly have needed such electromagnetic protection from space debris and asteroids encountered during deep space travel. It’s plausible that Tesla shields that have long been used on the Navy’s secret space program which were deployed in the early 1980’s, and this technology has recently been made available for the Navy’s conventional aircraft carriers given recent advances in hypersonic weapons development.

If Tesla shields have already been developed in a highly classified Navy space program, then it is reasonable to conclude that the HEEMG patent is based on electromagnetic shield concepts that Drs. Pais and Sheehy have been officially briefed about. The existence of Tesla shield technology provides a cogent explanation for why all aircraft carriers were mysteriously recalled in January 2017, the secret upgrades they received, and why Ford-class supercarriers are going to be built.

All this leads to the startling conclusion that U.S. Navy can protect all its aircraft carriers from hypersonic cruise and ballistic missiles using electromagnetic Tesla shields. Even more significant is the potential of such electromagnetic shields to protect entire cities and even the Earth as mentioned in the HEEMFG patent. The HEEMFG patent is cogent evidence that we are about to witness a profound military revolution from the development of offensive to defensive weapons systems where civilian populations are protected rather than sacrificed in strategic military planning.