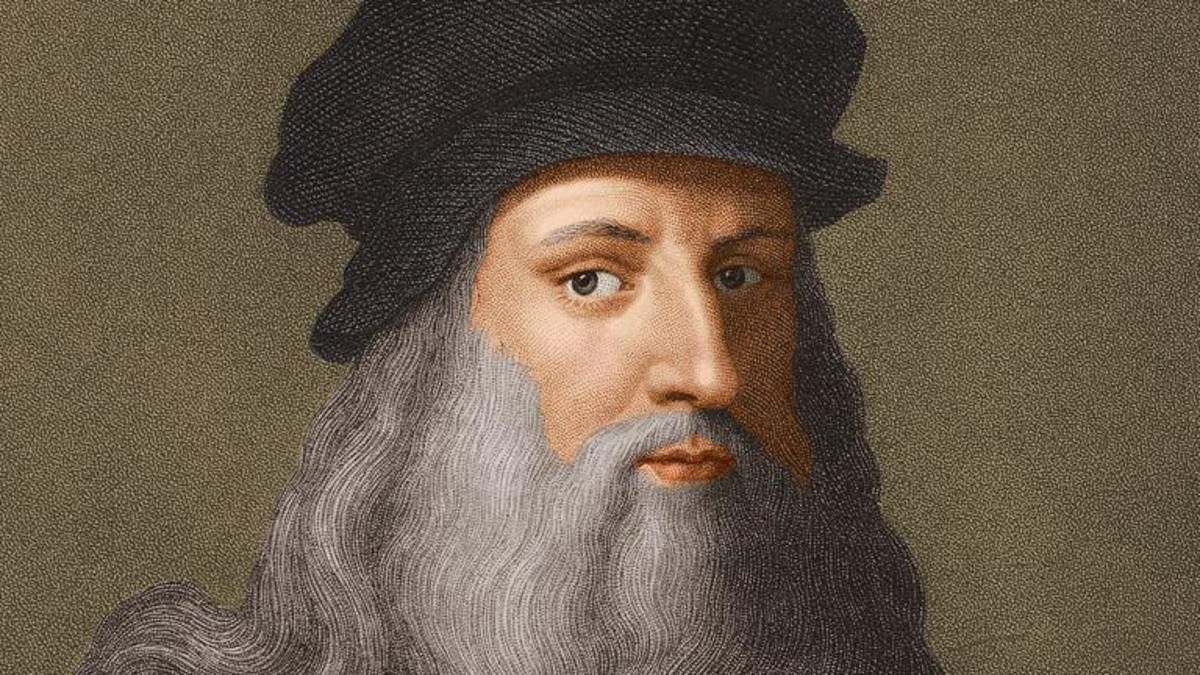 • A recent episode of the History Channel’s “Ancient Aliens” presented a side of Leonardo da Vinci (pictured above), the illegitimate son of a nobleman and a maid who became one of the world’s greatest inventors, painters, and thinkers, that few have considered. What if de Vinci was given knowledge or an IQ boost from an encounter with extraterrestrial beings?

• The only period in his lifetime when da Vinci disappears from the record is between 1476-1478. Just before this time he writes in his journal of being drawn to a cave while hiking when he was 24 years old. He relates that he was pulled into the cave by the desire to experience the wonder inside. Ancient astronaut theorists suggest that it was here that he interacted with aliens who revealed to him the future.

• During his life, da Vinci was scrutinized by the Roman Catholic church because of his unorthodox philosophical tastes. Consequently, he had to hide information in his paintings to avoid being labeled a heretic. Some example of these may include:

“The Virgin of the Rocks” – The painting (see below) depicts toddlers Jesus and John the Baptist in a rocky place reminiscent of the cave that da Vinci visited. They are under the protective watch of Virgin Mary and the angel Uriel, who is actually an extraterrestrial from the heavens.

“Adoration of the Magi” – Analysis in 2002 on da Vinci’s painting “Adoration of the Magi” (see below) using a technique called thermographics revealed layers of paint that were not painted by the original artist. Apparently da Vinci’s original contained a Pagan temple which was painted over. In the background is a temple with the lotus flower, the lotus ostensibly referring to alien beings.

“Salvator Mundi” – In his portrait of Salvator Mundi, da Vinci depicts his subject holding a Hindu/Buddhist Chintamani stone with three white dots that align to the stars of the Orion constellation.

“John the Baptist” – In this painting, St. John pointing upward with a knowing look on his face (see below), as if to point to ‘another realm’. Also, if you mirror the right side of John’s face in the painting it resembles a gray alien.

Sometimes Ancient Aliens makes a compelling case. Other times the case is not as iron clad. This is one of those in between cases. It takes a bit of faith and confidence in the overall plot to see the entire picture.

Some ancient astronaut theorists may not know all the details to this particular theory. It’s up to viewer discretion to determine if Leonardo da Vinci is linked to aliens. What’s the saying? “I want to believe.”

Eat your heart out Dan Brown. “The Da Vinci Code” may have unveiled some interesting links between religion, cover ups, secret societies, and Renaissance artwork, but it missed everything important. Some researchers claim there are even MORE hidden message found in da Vinci’s work. Furthermore, there is a likely extraterrestrial influence.

It goes without saying that Leonardo da Vinci (LDV) was ahead of his time. The prodigious volume of his ouevre makes it difficult to fully explore in a lifetime. His notebooks and manuscripts remain, however, and contain everything from construction plans for tanks and helicopters to wild inventions that have come into reality centuries later.

His impact is so profound that his “Salvator Mundi” was bought by a Saudi Prince for a new museum in Abu Dhabi for $400 million. During his life, LDV was scrutinized by the Roman Catholic church because of an appearance of wide-ranging philosophical tastes. Consequently, he had to hide information in his paintings to avoid being labeled a heretic.

Between the years 1476-1478, LDV disappeared from records. His life did not otherwise have gaps in terms of coverage. Just before this time, however, he had an interesting experience. One of the autobiographical anecdotes from his journal tells the story of being drawn to a cave while hiking. He was pulled in by the desire to experience the wonder inside. Some of the ancient astronaut theorists suggest that his experience inside the cave permitted him to see the future, and it is likely related to interaction with aliens.

“Adoration of the Magi”

Using a technique called thermographics, LDV’s “Adoration of the Magi” was analyzed in 2002 in Florence, Italy. An under-drawing was discovered inside the painting of the three wise men visiting the infant Jesus. The analysis, however, showed much more than what is visible to the naked eye.

As it turns out, there were layers of paint, some additions, that were not painted by the original artist. One such detail painted over was of a Pagan temple, would would have been a problem at the time with the prevailing church. In fact, one of the background drawings is a temple with the lotus flower (i.e. the flower of life). Some of the ancient astronaut theorists contend LDV was obsessed with the lotus flower, which may indicate his connection to potential alien contact.