Humans Would Be Cool with Finding Aliens

• A study of 501 people by Arizona State University psychologist Michael Varnum shows that people typically respond quite positively to the notion of microbial life on other planets.

• Past polls show that more than half of Americans, British and Germans believe intelligent extraterrestrial civilizations exist. Thirty percent believe that intelligent aliens have contacted Earth, but that the government has covered it up.

• “I think there might be something sort of comforting about knowing that life wasn’t an accident that happened once here,” he said. “Maybe it makes us feel a little less fragile or a little less lonely in the expanse of space” said Varnum.

If extraterrestrial life is ever discovered, humanity would probably be pretty cool with it.

A new study, one of very few of its kind, finds that people typically respond quite positively to the notion of life on other planets. The study investigated the possibility of finding microbial extraterrestrials, not intelligent E.T.s, so people’s responses might be a little different if they were told an armada of aliens were headed toward Earth, cautioned study author Michael Varnum, a psychologist at Arizona State University. Nevertheless, he noted, large portions of people believe that intelligent aliens do exist and that they’ve visited Earth; so even a more dramatic announcement might not ruffle feathers.

“What this suggests is, there’s no reason to be afraid” of sharing news of astrobiology with the public, Varnum told Live Science. “We won’t collapse. We’re not going to have chaos in the streets.”

How people would respond to finding they’re not alone in the universe is a perennial question, but one that has been the subject of far more speculation than study, Varnum said. He could find only one study that asked people how they thought they’d react to the announcement of extraterrestrial life, and it was a decade old.

Varnum wanted to tackle the question a bit more realistically. So he turned to the real-world news, analyzing articles dating back to 1967 that looked at discoveries that could potentially have hinted at alien life (including — full disclosure — articles by Live Science’s sister site Space.com on a star with irregular brightness cycles that might have signaled extraterrestrial activity, but the irregular cycles more likely result from orbiting dust).

Most of the language in these pieces skewed positive, software analyses revealed, and writers tended to emphasize the potential rewards of discovery over potential risks. Armed with that knowledge, Varnum turned to real people. He first recruited 501 subjects on Amazon’s Mechanical Turk crowd-sourcing website, paying them a small fee to write responses to two questions. One was how they would feel if scientists announced the discovery of alien microbial life. The other was how they thought the public at large would respond to such an announcement.

“It’s really much more likely that we’re going to encounter strange germs rather than E.T.,” Varnum said. And no one has previously studied people’s attitudes toward the discovery of alien microbes.
In a second study, Varnum recruited Mechanical Turk participants again. This time, they read a real-life article about the possibility of alien microbes. In 1996, scientists announced that they’d found what might be fossilized microbes in a Martian meteorite, known as Allan Hills 84001. Today, the researchers behind that discovery still think they may have found telltale signs of ancient alien life, though people in the field as a whole are far from convinced. At any rate, contemporary news articles about the discovery were very positive, Varnum said. He lifted one from The New York Times, stripped it of information about the date, and presented it to 256 participants as a new article. As a control group, he asked 249 other participants to read a real article about the creation of synthetic life in the laboratory.

In both studies, people reacted to the idea of alien life with more positivity than negativity, Varnum found. They tended to focus on the rewards over the risks. Individuals in the first study felt they, personally, would respond to the announcement of microbial E.T.s with a little more positivity than the public at large, but they still thought humanity as a whole would be enthused.

• A 62-year-old Felixstowe, England man remembers hanging out at a bar where US Air Force personnel stationed in RAF Bentwaters would go in 1980. He asked not to be named. On one evening he overheard the American servicemen, whom he knew, talking about their encounter with strange “lights and little people”. He says that one of the servicemen was agitated and his friends had to calm him down. Days later the Brit asked about the agitated serviceman. The friend told him that he was okay, but for some unknown reason the Air Force had relocated him back to the United States.

• The Brit didn’t hear about the now infamous Rendlesham UFO event until four years later, when it was reported that a triangular-shaped UFO landed in the woods near the US military base on December 26 and 28, 1980.

• [Editor’s Note] This is further confirmation that the Rendlesham Forest incident did occur, to go along with the substantial amount of circumstantial evidence that already exists.

The 62-year-old, who asked Express.co.uk not to name him, claims to have heard US Air Force (USAF) personal discussing “lights” and “little people” just days after the notorious Rendlesham UFO sightings in Suffolk in December 1980.

The Rendlesham legend, which centres around neighbouring bases RAF Woodbridge and RAF Bentwaters, near Mildenhall, Suffolk, has been dubbed Britain’s Roswell, in a nod to the mystery of the UFO crash said to have taken place outside the town in New Mexico, USA, in July 1947.

The suspected alien event at Rendlesham saw three US officers based at RAF Bentwaters claim a “triangular-shaped craft” landed in neighbouring woods in the early hours of December 26, 1980, returning over two further nights.

The man, who was working in the warehouse of a newspaper and magazine company in Felixstowe at the time, says he was in the bar of The Marlborough Hotel on Felixstowe sea front between Christmas and New Year 1980, when he heard the bizarre exchange.

He said: “The sea front hotels were very popular with the USAF personnel, in particular the newly opened Flying Boat bar at the Marlborough.

“I knew a few of the USAF personnel by name, but it was just through bar talk and we had no association outside of the pub.

“I was having a drink at the bar.

“There were a number of USAF personnel in the Boat, as we called it and a small group of them stood alone in a corner of the bar.

“I looked over at them occasionally and could see they were having a serious discussion over something.
“One airman seemed to be particularly agitated.

“I edged over towards them, whether I wanted to be nosy, or just get closer to the fire I don’t know, but I did overhear a few words.

“The airman that was agitated talked about lights and little people.”

He said he had no idea at the time about the Rendlesham case, and did not learn about it until four years later when the News of the World ran an article about the “alien” event.

The man said: “Obviously it was a little weird, but the events of 1980 were not known generally at that time, so it meant nothing to me.

“The airman was calmed down by his pals and they got another round in.

“I asked the airman that went to the bar whether his mate was all right. He just answered he was a little upset, nothing more.

“A short while later the agitated airman let his emotions get the better of him again and he started waffling on, however I could not make out what he was saying.

“One of his mates then put an arm on him, trying to calm him down and told him to keep quiet or he would be in trouble.”

He said a few days later, the airman that had come to the bar to get a round in was back in the pub.
The man said: “I asked if his mate had recovered from the last time I saw them.

“He said, ‘he thought so, but he had been sent back to the States and no-one knew why’.” 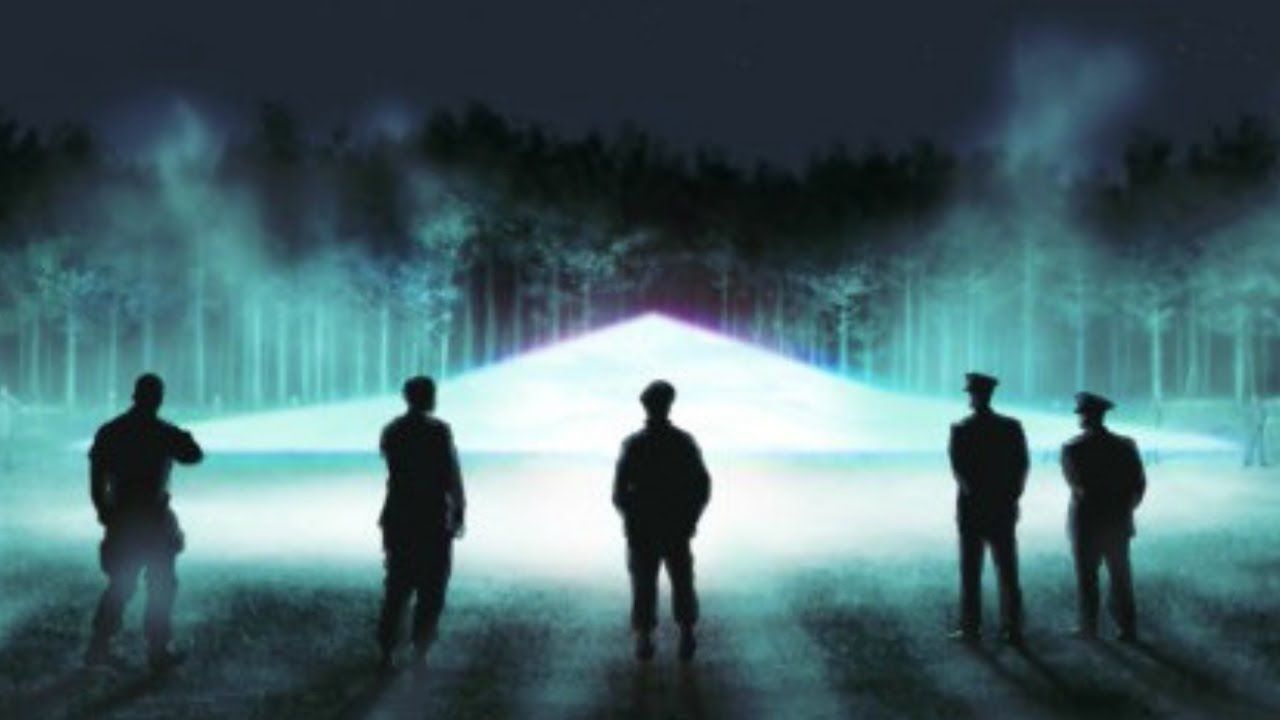 • Those who are clued-in to the UFO tapestry well know the account of the U.S. military personnel who witnessed the baffling UFO/ET events just outside of RAF Woodbridge near Rendlesham Forest in Suffolk, England on the nights of December 26 and 28, 1980. It has been the subject of numerous books, articles and documentaries, but has never quite made it into the pop-cultural landscape to the level of Roswell.

• Sony Pictures Television intends to change all of that by teaming up with award-winning writer/director Joe Ahearne (Doctor Who) and UK-based Eleventh Hour Films to produce a major new TV drama based on the UFO incident called Rendlesham.

• [Editor’s Note] Or will the deep state-compromised Sony Corporation choose to do a dis-info hatchet job to bury the Rendelsham incident for good?

During the past three-and-a-half decades, Britain’s most famous/notorious UFO case has been the subject of numerous books, articles and documentaries. It has also generated some of the most fierce and downright nasty feuds the UFO field has ever known. We are, of course, referring to the Rendlesham Forest incident, in which US military personnel bore witness to baffling events just outside of RAF Woodbridge near Rendlesham Forest, Suffolk, on the nights of December 26 and 28, 1980.

Despite having embedded itself firmly into UFO lore and having made the occasional dent in official culture as tabloid fodder, those Rendlesham UFOs—whatever they were—never managed to plant their landing gear fully into our pop-cultural landscape. That may be about to change, however.

According to The Hollywood Reporter, Sony Pictures Television has teamed up with UK-based Eleventh Hour Films for Rendlesham, a major new TV drama based on the UFO incident(s).

The show is to be helmed by award-winning writer/director Joe Ahearne (Doctor Who). Co-producer Eve Gutierrez told the Hollywood Reporter: “Joe is a master story-teller with a long-standing fascination for science-fiction so we were totally thrilled when the Rendlesham story sparked for him… Now, working with Sony Pictures Television, we are looking forward to bringing this timely, other-worldly story to the global market.”